Michael Vick has a league. Now all he needs is a team.

That’s right, former NFL QB Michael Vick is returning to professional football. He has joined Fan Controlled Football, a 7-on-7 American football league that gives people their football fix while the NFL hibernates during the spring and summer.

According to Reuters, Vick, 41, agreed to join the league when he saw the success that Terrell Owens, 48, has had in it so far this year. Vick is expected to make his debut at the end of the month. 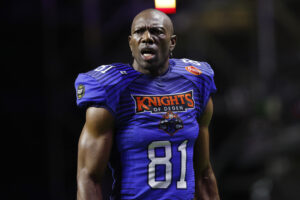 Vick spent nearly 15 years in the NFL, mostly with the Atlanta Falcons. However, his NFL career was infamously interrupted when he was convicted of participating in an illegal dog fighting racket and served 21 months in federal prison. He then returned to play for the Eagles and earned the Comeback Player of the Year nod in 2010. He officially retired from the NFL in 2017, though he hadn’t seen the field since 2015.

This year, FCF has really hit its stride. Reuters reports that, on the backs of big names like Owens, Johnny Manziel, and now Michael Vick, FCF has already surpassed the viewership numbers of all of last year, only five weeks into the season.