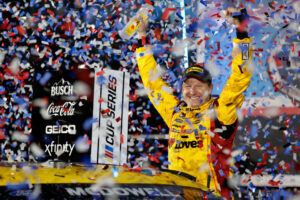 It took a lot longer than normal, but Michael McDowell has won the Daytona 500.

The race got off to a usual starter, but a big crash due to extensive rain on lap 15 caused a delay that lasted almost five and a half hours. In fact, drivers didn’t even get things going again until a little after 9 p.m. ET, which means the race wasn’t over until after midnight.

Did it end in excitement? Of course it did. It always does.

For a moment, there was some concern about the safety of a few of the drivers after a massive wreck brought out the caution flag on the last lap of the race. There were even flames involved, but fortunately, no one was seriously injured.

As you can see, it looks like McDowell was the one who caused the wreck. He nudged Brad Keselowski (No. 2 car) into the back of Joey Logano (No. 22 car), causing all hell to break loose.

Of course, some people on social media weren’t happy with the outcome, but that’s NASCAR. It had been a boring race up to that point with little movement, so at least the ending added a layer of interest.