Well, the ‘What’s the best purchase you’ve made lately?’ subject set off a debate in a group text

That escalated quickly. All I had to do in the group text with the boys was ask one of the guys about his Traeger while knowing that another guy has been Team Blackstone all summer. Talk about fireworks! I’m talking grand slam, red meat text exchange rocket fuel. I received several messages from Screencaps readers on Thursday saying I need to get into the pellet grill game as it has changed their lives.

But I also heard from Big Daddy Diesel Renius in the group text on how the Blackstone will change my patio cooking lifestyle. The D is approximately 6’6, 325 or so (but he’s been walking and watching the beers; let’s put it this way, I trust him with many food decisions).

CB is a 30-year-old former Morehead State defensive lineman who is now doing triathlons & eating piles of meat to fuel up. He has three boys six & under who have Royal Rumbles on a nightly basis. The four of them eat like they’re heading into the Arctic with no guarantees they’ll find a meal for the next eight weeks. In other words, this is a real showdown amongst titans of the grilling/foodie industry. 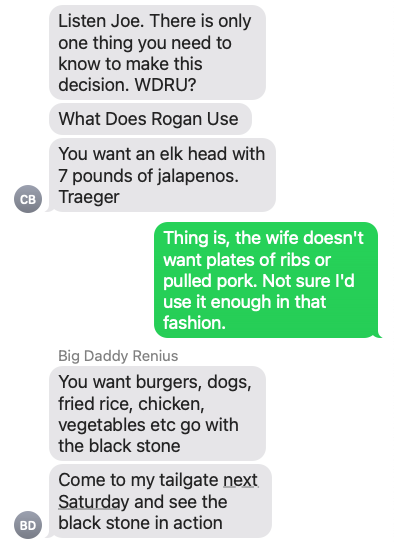 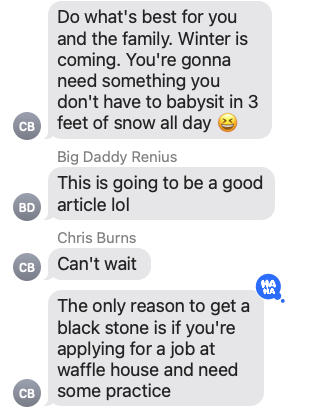 I keep thinking the Traeger might be overkill for my family, but then I go over to the Traeger Instagram page and see the most beautiful grilled chickens that my wife would die for. I see smoked wings that I would destroy. But then I start wondering if it’s just too much grill at this time. Am I more Waffle House short-order cook at this moment in my life? This is what is going through my head during this difficult time.

Do I want this lifestyle?

Or do I want to make it rain like this? I know what you guys are thinking: just get one of each. Not happening. There are certain guys who enjoy that lifestyle. Not me. I want to cook a meal and go back to watching football and drinking.

A pellet grill. I have a Camp Chef, but a couple of buddies with Traegers love them. Requires no skill or experience whatsoever to crank out some seriously good smoked meats. Hang on to your propane or charcoal grill for searing/high temp cooking. But you can throw a whole packer brisket on a pellet before bed and have a champion grade bbq meal for dinner the next day.

Alternatively, if you don’t have a commercial mower, treat yourself. My weapon of choice is a SCAG 36” walk-behind with the hydrostatic transmission. It’s a beast and lets me do my half-acre in an hour. But there are a lot of good choices out there: Wright, Exmark, and Ferris to name a few.

• ‘Non-vaxxed JT’ in Texas sent in this wild email. I never expected to hear that a wife was pumped up over a mailbox. Keep this in mind, fellas.

My wife told me that our best recent purchase was a $250 copper-colored mailbox.  Of course we had to get the custom street name and number plaque as well — reflective number stickers are apparently too pedestrian.  And Joe, that’s not the whole setup, just the freaking mailbox.  Add in the post, ground screw, 4×4, and hardware, our mailbox is tipping the scales at around $450, or as I account for it, a good chunk of a mortgage payment.  Absurd.  But I was told we “needed it” and that “wives really like a nice mailbox.”

Treat yourself to a battery-operated chainsaw. Once you have it you will want the pole saw. No more calling the “Tree Guy”. Pricey but no more bad gas in the chainsaw you use 1x / year.

• Gerard then wrote back jumping on the pellet grill train and said he’s made the bacon-wrapped Oreos on his grill. They “were just OK,” he added.

I assume you already have a pellet grill. You would obviously use that more than a chainsaw.

• Tyler R. in Kennesaw, GA brings up a great topic that I’ve had before with guys. Toilets! This is definitely something people constantly mention on the topic of best purchases made lately:

The wife and I are renovating our master bathroom.  She’s a talented designer so has all the best tile, colors, etc. picked out.  Our contractor is done with all work except the glass shower which has to be custom made and cut.  Anyway, my lone contribution to the new bathroom was I got to pick the new toilet!

Have you ever shopped for toilets?  Living in a 20-year-old home I had not.  I didn’t know what to expect.  They’re toilets!  All the same – white, porcelain, round.  No sirreee.  While many are similar there are some key differences.
Do you want one or two-piece toilets?  Round or Elongated?  White or even black!?  Regular height, chair height, you catch my drift.
Well, I ended up picking this unit, and she is a beauty – https://www.homedepot.com/p/Glacier-Bay-Power-Flush-2-Piece-1-28-GPF-Single-Flush-Elongated-Toilet-in-White-with-Slow-Close-Seat-Included-N2450E/308702440.  For the reasonable price of $159 you get a tall, beautiful toilet that has the most amazing flush power.  It can flush pool balls!  While I do have a pool table I like to play it and I’m not really willing to tempt fate and flush pool balls down the drain system.
But it is groundbreaking.  Sure my wife raves about the new waterfall shower, or the clean white custom tile.  Whatever.  This toilet is the bees knees and the best part of the reno.  Now I’m just deciding when I want to pony up the money and replace the other 4 toilets in the house!  The toilets themselves are reasonably priced but the plumber labor is pretty high on that work.
Anyway, love the articles.  I read your posts daily and tell Clay you deserve a raise! Take care, got a lawn to mow.
• Mike T. typically checks in with just a mowing report, but today he’s all over the topic of the best purchase he’s recently made:
Bro,
Success mowing TNML but with our irrigation water shut off not much to show( Idaho is in a desert and we are having a terrible drought)
However, I saw you request on items you’ve purchased. I go to the gym often, but the saunas at the gym are disgusting, so I’ve quit using them in the last few years.
After the removal of the tiki bar from the garage, I’ve got additional space so we purchased a small steam sauna from Costco. It’s a 4-week delivery schedule so we are hoping to receive it next week.
After installation in the garage, I’ll send pictures. Quite excited to wake up  Saturday and Sunday morning after a busy night and hit the steam sauna to melt the night away!
https://www.costco.com/almost-heaven-bluestone-3-person-steam-sauna-.product.100485086.html
• I’m absolutely jealous of Mike jumping into the sauna world. I have the perfect spot for one of these, but I’m not ready just yet for the remodel project that would include adding a full bath behind our garage so that I can tell my kids to go straight from the car to the shower without entering the house. I keep telling my wife that a new bathroom behind our garage would change our lives. She seems to be on board with the idea. A sauna would make it that much better.
• John S. has a much less expensive purchase idea:
Buy yourself a WorkSharp knife and tool sharpener.  Sharpen your mower blades in the “off season” yall get up north.  https://www.worksharptools.com/shop/product-category/sharpeners/
• And with that, I’m officially broke! Thanks to all the guys who shared ideas. Believe it or not, I’m completely intrigued by what inspires the readers, whether it’s a new mailbox or a toilet. And I love the passion for these useful things. This is like when I was a kid going to the VFW hall with my grandfather and listening to all the dads and grandpas firing off things they’ve picked up or are working on.
Anyway, have a great weekend. Remember, I post Screencaps on Saturdays and Sundays through football season, so make sure to stop back. Send emails. Send pics. Etc.
Email: joekinsey@gmail.com

The last TE to score a rush TD age 22 or younger was Rob Gronkowski for the Patriots in Week 13, 2011 vs the Colts@Panthers @RobGronkowski

#FloridaState fans are realizing that maybe they should have just paid Jimbo Fisher what he wanted. pic.twitter.com/nds4qNRnCq

harris english looks he's got 90 minutes left in the flight home from Vegas and something REALLY isn't sitting well pic.twitter.com/q9tY1X7gAB

The sunrise at No. 6 at Whistling Straits is really something 🤯

A rare #redlight hole location on #8 for later today in #TNML. It makes zero sense to bring the bunker or hedgerow into play. pic.twitter.com/iiMwbciFPv

Unreal warmup #sesh. You could have thrown a dinner napkin over the 30 punch outs I hit. #TNML pic.twitter.com/q5qFQkYc82

Your starting rotation could never. pic.twitter.com/bL2hNa16BZ

Andy Dalton being rocked by Steelers linebackers for a decade of my life pic.twitter.com/CfR9So2SdW

Here’s a throat cut off pic.twitter.com/hGJX9LNpo0

Fenway Park in the 1940s. Love the old ads on the Green Monster pic.twitter.com/X6HDO1uLRl

Guy @PhoenixMercury game with the Griner jersey made out of duct tape. pic.twitter.com/l2DrSNZ5g6

A shipment from Germany heading to Australia caught the eye of Louisville CBP. Officers inspected the package & found candles concealing 9lbs of crystal meth. Meth is one of the most commonly misused stimulants in the world & contributes to the most violent crimes in the U.S. pic.twitter.com/rUTVAdQGb8 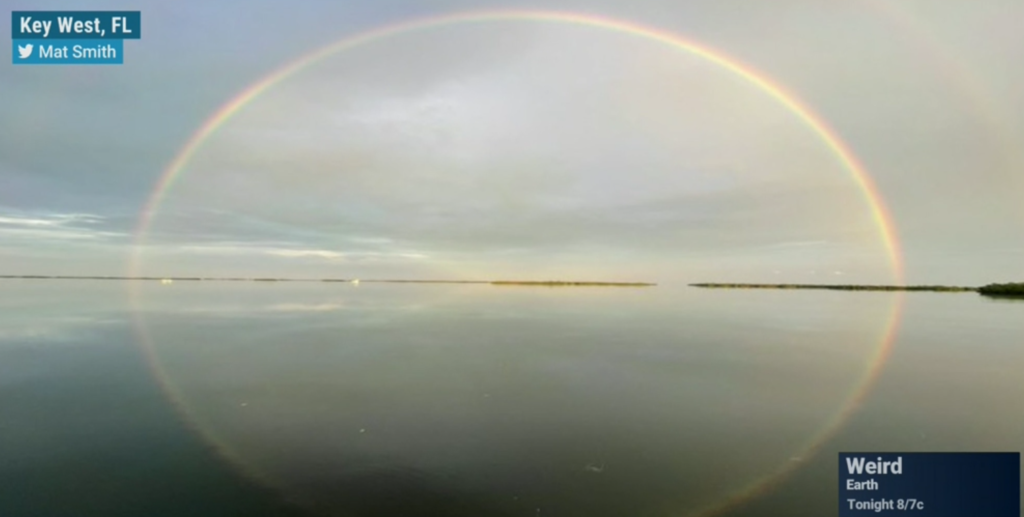