The NBA season is finally over, so now we can talk about important things like passenger luggage removal speed

Tuesday I developed what I assume will be a recurring post here out OutKick that I dubbed ‘Budget Airline Brawls’ because there are just that many fights on budget airlines these days that the subject deserves its own tagline. The latest brawl was over luggage removal speed, which led to me asking you guys about the psychology behind passengers in a massive hurry to get off planes like the plane is on fire and they need to escape NOW.

Drew De V. in Texas emailed in with an explanation for me on this very subject:

Luggage speed is like red light/green light speed. You sat at this light knowing at some point it was going to turn green yet you seem surprised when it does and are totally unprepared to go. So you get honks.
Same thing with luggage speed. You see the plane is stopped and the people in front of you leaving, but somehow you’re surprised when everyone in front of you is gone. So now you decide to get your bags down while everyone behind you already has theirs.
2 things –
1. – People are bringing way too much stuff on a plane to avoid fees and baggage claim.
2. – spring for a reputable airline. It’s worth the extra money.
Good day to you sir!

I completely agree with Drew’s No. 2 take as someone who was treated by my former employer to Spirit Airlines flights from Detroit to New York City. What a treat those were, especially in the winter. But I have to disagree with Drew on the premise that people aren’t prepared to grab their luggage when it’s time to go. The problem is that there are three seats on each side of the plane. The person on the window is stuck in there waiting for the other two people to grab their carry-ons.

Window person gets out and is berated that they’re moving too slow by the people in row 35. Buy a seat at the front of the plane, assholes. It’s your fault that you’re in row 35 in a massive hurry. Allow window seat person to grab their things and move along.

I’m starting to think the real problem with the airlines is that the budget airline prices allow for uncivilized dirtbags to fly and they’re used to living like uncivilized losers back home. They bring that energy onto the planes and that has caused complete chaos in the skies.

That’s why I’ll spend the extra $100 and fly Delta. While it’s not perfect, the likelihood that my flight doesn’t turn into a World Star video is fairly high.

• Jon wants to weigh in on the question I posed about the age when Screencaps parents have introduced their kids to Terminator movies:

I think my experience is unique, but I’ll share it with you in the hopes it helps. My boys are currently 8, 6, and 4.  My 8 y/o loves dinosaurs so naturally we searched for kids dinosaur movies and found The Good Dinosaur.  Watch it at home as a family one night and the whole time he doesn’t seem too interested.  His younger brothers were engaged so when the movie ends, we’re getting them ready for bed and my oldest says to me that he’s scared and wants to sleep in his brother’s room for the night.  Fine, didn’t think anything of it.  Over the next week, he is up 3-4  times in the middle of the night saying he’s scared.

Pretty odd since of the 3 boys, he’s never had any issues sleeping through the night.  We keep asking him what’s wrong and his answer is the same… The movie was scary.  How the hell is an animated kids movie scary?!?!  Fast forward a couple months and my oldest sees a commercial for one of the new Jurassic Park (World) movies and he is begging to watch it.  Obviously, there’s no chance in hell he’s going to be able to handle anything like that if he can’t handle The Good Dinosaur, right?  Now you’ve got to understand this kid is obsessed with anything dinosaurs and even corrects my pronunciation of the names.  I’ve never heard of Quetzalcoatlus, let alone do I know how to pronounce it… He does.  So, we decide to show him a few clips on YouTube from the original Jurassic Park just to gauge how he’s going to react.

To our amazement, he’s totally fine.  Turns out the kid is just terrified of animated things but real-life-looking dinosaurs eating people and dismembering them is totally fine with him.  Since then, we have watched all the Jurassic Park and Jurassic World movies.  His brothers are still a little young but you pretty much just have to go with the old trial and error on what they watch.  Our sons are around the same age and Terminator movies are likely to be playing in the next year or so in my household.  It’s been fun being able to share this with him.  Now if I could only get them to watch football with me!  In due time, I guess.

Hey Joe!
I look forward to your article every morning to get me going out here in Utah! Saw your question on the movies and had to share my experience. My wife and I separated back in December and as part of my commitment to the kids, I decided to take a half-day every week and take my boy skiing. We’d never gone in the first 13 years of his life and it was time I quit working so damn much and spend more time with him.
Fast forward to your question, every Wednesday after we got done night skiing, we’d head on over to whatever he had a hankering for, whether it was burgers, chicken wings, or even the pizzeria I’m a part-owner in, and we’d head back to my apartment and throw on an old 80’s action movie.
We totally loved watching Terminator 1 & 2, Total Recall, Alien, and Aliens! I hope he remembers it as much as I will. I’m already getting Rambo, Predator, First Blood, etc. ready for this upcoming ski season!
Keep up the great work!

• I wish nothing but the best for Jake and his son as they make up for lost time. Now, I can’t think of a better way to get things rolling at 13 than working through the classics vault and Jake has thrown out what looks like a gateway to the teenage years right there. Look at those classics. Think about watching those classics for the first time. Gives me chills even thinking about being 13 and consuming so many movies, baseball cards, Reds games, Bengals games. Take me back right now!

• Kendall L., who was driving with his family and listening to the Zoom VIP call I did this past Saturday, writes:

Hey, Joe! I really enjoyed the Zoom on Saturday and hope you will be on them more frequently. I look forward to it!

How did the playoff games go Saturday?

Lastly, if you ever decide to come south for a family vacay, this is the spot I was driving back from on Saturday during the call. 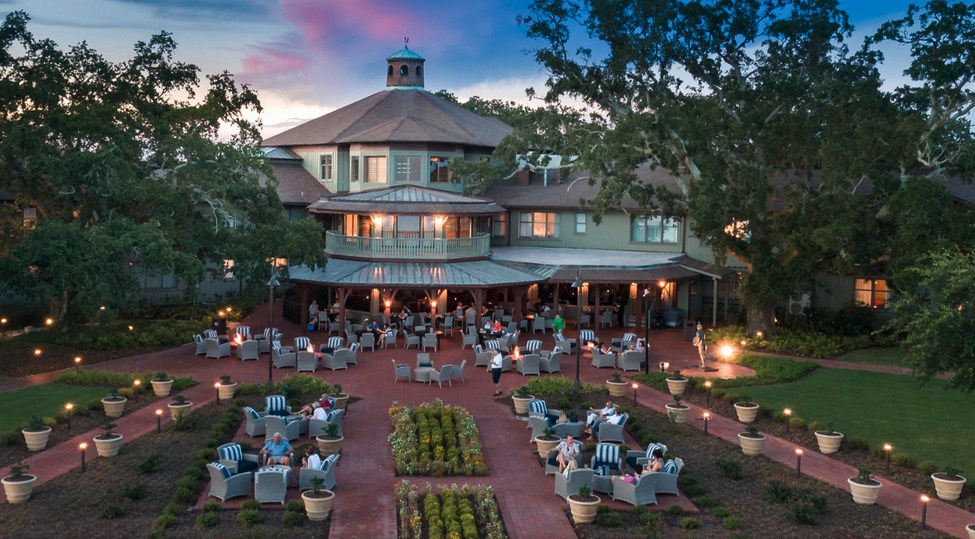 • Kendall had at least 2-3 kids in his backseat as he was driving home from this resort. I wondered why he was being so quiet and then he pans to the wife and the kids. He’s just a guy trying to get along like the rest of us with kids.

As for the 8U game, my son’s team lost — I believe it was 8-1. It’s hard to win with your best player out and you can’t drive in runs with kids in scoring position. All in all, I couldn’t be prouder. Monday, my son begged me to throw BP, so we went out and I brought the heat. My pitch count got up to 80 or so and he was finished. Now he wants to go to the driving range. I have 100% never pushed sports on my son because I have this incredible drive to not be one of those dads and yet here we are with things starting to click. It’s time for him to lead me down his own sporting path.

I’m just along for the ride — as long as it doesn’t mean multiple travel ball weekends. A dad still has to have a life, too.

Tonight was the second time the @Dodgers' Will Smith has had a pinch-hit walkoff home run (also on June 23, 2019).

He's the second player in MLB history to do that twice before turning 27 years old.

The other was Willie McCovey.

Kirby Smart dusting his son in a beach race and high stepping at the end is great: pic.twitter.com/YhzpIrXmNV

Peep the lady next Larry Fitzgerald. Someone got caught in 4K on live TV 😂 pic.twitter.com/TctqMeqIa0

Monty Williams is seriously one of the greatest human beings on this planet. pic.twitter.com/GgZ5JeOO2K

making sure this is Tommy Pham pic.twitter.com/1fNRisMzsg

#Yankees infield prospect Armando Alvarez dives into the photographers' well to make a play for the @swbrailriders. pic.twitter.com/1WptMmTuJV

I’m seeing a lot of people upset that we’re playing on a baseball field.

Softball hasn’t been in the Olympics in 13 years. I don’t care what the field looks like, we’re happy it’s back & we’ve been waiting a very long time. Our play WILL NOT change. We’re GOOD enough to adapt. pic.twitter.com/VXMjiLqARG

Another year of disappointment. Have to keep trying. pic.twitter.com/S1W9NHI5eT

You know it’s a premium quality mall when there’s a Kmart as an anchor store. pic.twitter.com/b47OQw7ol6

Look what I saw today pic.twitter.com/2dHFWk6VSe

Las Vegas Strip & snow capped mountains, early 1990. Redd Foxx on the board at the Hacienda. Photo by Don Ploke. pic.twitter.com/x9GQT75hqJ