A marine has started a petition for the NFL to retire the late Pat Tillman’s No. 40 to pay homage to the former Arizona Cardinals defensive back who was killed during active duty in 2004.

The marine, Sean Wilson, wrote a letter to introduce the petition and spoke about his cause on Fox & Friends. The letter reads as follows:

Recently, I have started a “Change. Org” movement to attempt to have the NFL retire Pat Tillman’s jersey number 40 league-wide.

In two weeks we have already garnered 15,800 signatures.

Similar to JJ Watts recent project, this is all to honor the legacy of a great man.

I was curious if you had any interest in story this as I am trying gain momentum behind the movement.

The story was featured on ‘Fox and Friends First’ on Wednesday:

The link to the petition can be found here: https://www.change.org/NFLRetire40

Tillman gave up his NFL career to join the Army and fight the War on Terrorism in May 2002. He was just 27 years old when he was killed by friendly fire in the mountains of Afghanistan in April 2004.

Tillman was the first pro football player to be killed in combat since former Buffalo Bills guard Bob Kalsu, who died in the Vietnam War in 1970. Tillman was posthumously promoted from specialist to corporal and received the Silver Star and Purple Heart medals following his death. 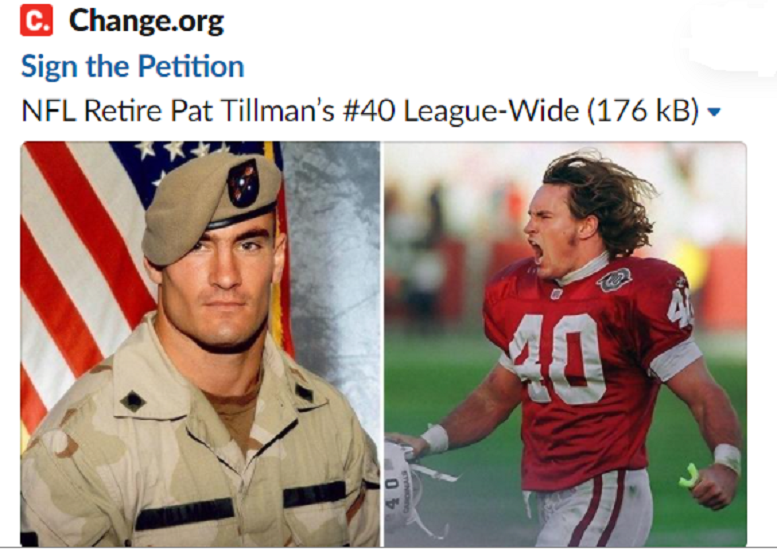