Firestone, the CEO of Aureus Asset Management, appeared on CNBC Monday to talk about the dog days of Wall Street. Perhaps Firestone brought insightful analysis to the discussion. But no one will ever know because her segment quickly fell off the rails.

Forget the barking dogs. A half-naked man appeared in Firestone’s background as she made a national television appearance:

There is a naked man on CNBC 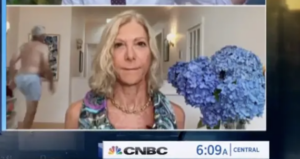 Credit to CNBC anchor Andrew Ross Sorkin for keeping his cool. No one could have faulted him had he broke out laughing. Instead, he ignored the man in his underwear and acted as if it was business as usual.

Firestone often reposts her CNBC segments on social media after they air. She has not posted this one. It’s unclear as to why.

While you might think this is funny, Firestone may have cost future cable news contributors the chance to do TV hits from home.

Networks have shown a willingness to let guests appear over Skype as opposed to the nearest studio. And while channels like CNBC will put up with shaky internet service, a man in his underwear could be a bridge too far.