The LSU Tigers weren’t thinking about anything else but basketball on Thursday and it showed on the court against a pretty bad Missouri team. Even though there were off-court distractions this week for the university, the players on the court took care of business in their first game of the SEC Tournament, defeating Missouri 76-68.

We’ve seen it all season long, but the Missouri Tigers showed us once again how hard it can be to watch this team play basketball. I don’t discredit any of the effort shown by the players on the court, but Cuonzo Martin has eight players who can contribute and it reared its ugly head again on Thursday. 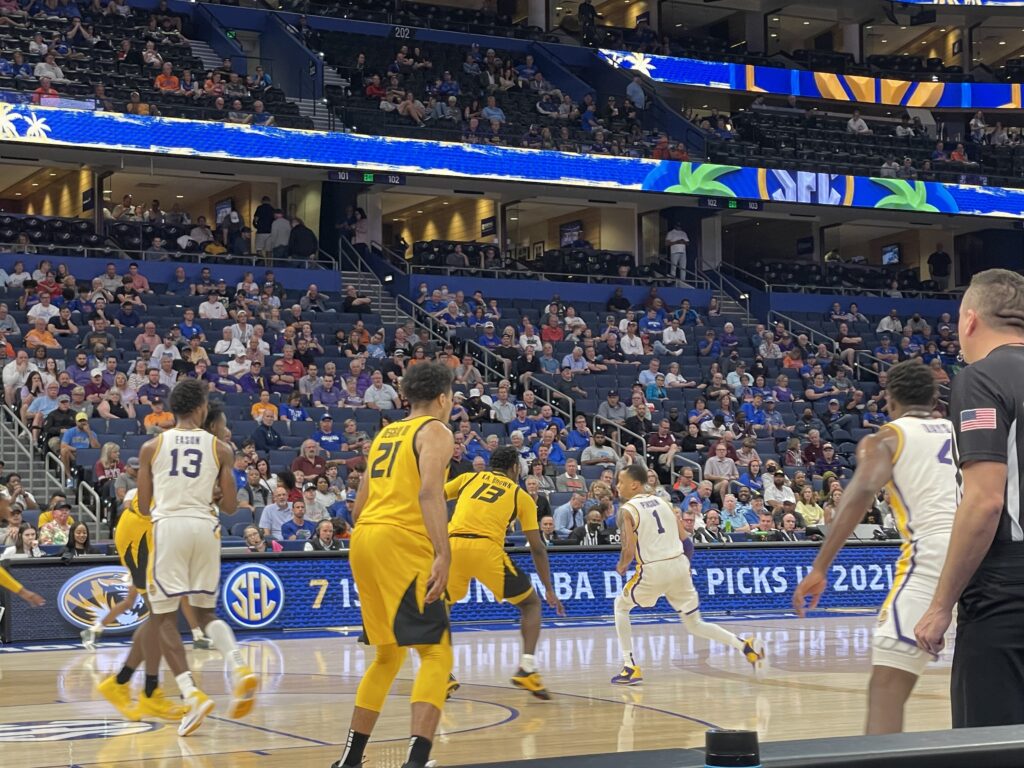 The question will now be asked again about the future of Cuonzo Martin at Missouri. Does he get another year to try and turn things around or does his tenure in Columbia come to an end? These answers will likely come within the next few days, but Martin has always maintained that life would work itself out and that he doesn’t control those answers.

As for Will Wade’s squad, they came into this game with the mindset of destroying Missouri at all costs, leading 39-23 at halftime. It was worse, but the Tigers (Missouri) found a few easy buckets before the buzzer. It was Xavier Pinson leading the way in the first half, scoring 11 points, followed by Darius Days with 10 points.

Will Wade was asked postgame about the ‘Notice Of Allegations’ the school received this week from the NCAA, pointing out that no players in the locker room have anything to do with what’s going on.

“We just focus on what’s in front of us. There’s not one kid in that locker room that’s got anything to do with. It’s got nothing to do with anybody in that locker room, and look, the bigger the game, the bigger all the stuff’s that’s going on outside. You’ve got to narrow your focus. And we’ve been very good at narrowing our focus, and we’re here to play basketball. Everything else, that’ll happen when it happens. But we’re here to play basketball. We’re excited about being here. It’s a great event here in Tampa. We’re here to represent LSU, represent the state of Louisiana and try to win the thing for the first time since 1980.”

The second half brought much of the same, besides a quick spurt from Missouri to cut it down to 41-30 in the early portion of the second half. It was all LSU, leading by 23 points with eight minutes remaining.

The Tigers of Baton Rouge had five different players in double-digit scoring against Missouri, with Tari Eason leading the way with 19 points.

This will all change and the Tigers will now prepare for a rematch with Arkansas, to whom they have lost twice already this season. How will the Tigers stop JD Notae and Jaylin Williams? What kind of shooting performance will we get from Xavier Pinson tomorrow against a much tougher defense?

This biggest question for me going into this game will be how Tari Eason and Darius Days play around the basket. Eason went off for 24 points in the previous outing, which Arkansas won in the final seconds. Darius Days scored 19 points in that game as well, but this could turn into a different type of game for both teams.

We know that Arkansas will look to push the ball in transition, while also trying to get the Tigers in foul trouble early on. But this game has all the makings of something special, just as we witnessed one week ago.

Get ready, because this rematch could be the showstopper on Friday if this same LSU team shows up.