Lizzo last year sang about how “fat” her bank account is. This year, she says laws are oppressing her.

Sunday, the VMAs awarded Lizzo with a trophy for her music videos. Lizzo won the award for “Video for Good,” whatever that means.

During her speech, she encouraged voters to vote a certain way to end oppressing laws:

This may be the least oppressed person on the planet https://t.co/SbiQ2thuOa

What laws are oppressive? Unfortunately, Lizzo couldn’t tell us. She probably saw someone use the word on social media and thought she’d borrow it for her speech.

“Does she means laws like the one I signed in Wisconsin that requires a photo ID to vote?!?” former Governor Scott Walker (R-WI) tweeted in response to Lizzo’s claim.  “‘Cause we saw the largest turnout in 70 years at the last fall election. Sounds like another celebrity ignoring the facts.”

As Ben Shapiro notes above, there are few figures less oppressed than Lizzo. The media props her up as a “body icon” for being overweight.

The same writers who denounced Adele’s weight loss have treated Lizzo to darling status. Outlets like Vogue put her opinion on pedestals as they write fawning puff pieces:

Lizzo dives into controversial issues and calls it “fat-shaming” when people disagree with her opinion.

She’s also quite desperate for attention. Few people, fat or skinny, post videos of themselves walking into a plane in a tiny thong: 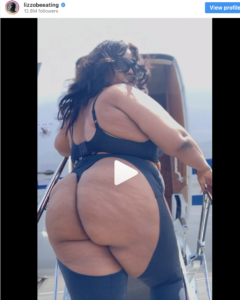 If oppressed means a “fat bank account,” getting to post half-nude photos, loyalty from the press, and a privileged life — we must fight for oppression for all.