The Detroit Lions still have their two main football vacancies to fill, as they continue their search for a general manager and coach. But hey, they may be getting closer to a GM, anyway.

According to Adam Schefter of ESPN, the Lions are interviewing Los Angeles Rams director of college scouting Brad Holmes a second time. This time, Schefter noted, they brought Holmes to Detroit.

The Lions are being mostly transparent about their GM search, having announced the interviewees for a good three weeks.

But the Lions will have some competition. Holmes has also reportedly interviewed twice for the same position with the Atlanta Falcons.

Both the Lions and Falcons also need a new head coach, but generally, organizations hire a GM first and then let him bring in his own guy. Apparently, Holmes will have a chance to be that guy for a couple of teams.

The Lions fired former GM Bob Quinn as well as head coach Matt Patricia after the team got plastered by the Houston Texans in their annual Thanksgiving Day game. 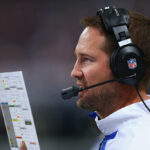