Lia Thomas, the Penn transgender swimmer who competed at the school for three seasons as a male, cruised Thursday afternoon during the 500 freestyle prelims and enters tonight’s finals with a time five seconds better than the closest competitor, who just happens to be her teammate Anna Sofia Kalandadze.

The only drama left tonight at Blodgett Pool on the Harvard campus will come down to whether Thomas wants to smash the pool (4:37.64) and meet records (4:36.37) or if simply winning a league title will be good enough. Thomas put up the nation’s fastest female 500 freestyle time (4:34.06) back in December.

While there’s been plenty of drama around Thomas’ inclusion at the NCAA Championships as testosterone rules changed in January, the Ivy League announced last week that Thomas was free and clear to crush the competition at its championships.

After the Ivy League decision was made, the NCAA followed suit and cleared Thomas to swim in Atlanta for national championships in the 200 and 500 freestyle events.

“The subcommittee decided implementing additional changes at this time could have unfair and potentially detrimental impacts on schools and student-athletes intending to compete in 2022 NCAA women’s swimming championships,” the NCAA announced in a press release.

Now comes the total destruction of biological females who will stand zero chance when they step up on the block Thursday night. 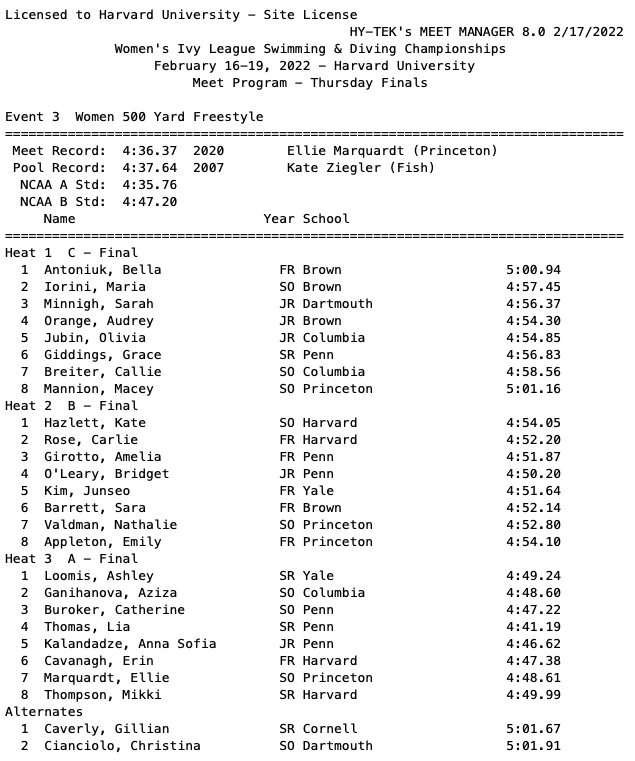 It’s on that block where, back in December, Thomas left teammates in tears at an event in Akron. It was after that meet when one of Thomas’ teammates described what it’s like for biological females when they face Thomas.

“They feel so discouraged because no matter how much work they put in it, they’re going to lose. Usually, they can get behind the blocks and know they out-trained all their competitors and they’re going to win and give it all they’ve got,” the source said.

“Now they’re having to go behind the blocks knowing no matter what, they do not have the chance to win. I think that it’s really getting to everyone.”