Remember years ago when LeBron James reported to Los Angeles police that someone had spraypainted racist graffiti on his mansion gate? It was a massive story from the usual suspects until it was no longer a story because it quietly went away. “The sports media immediately fell all over themselves to pronounce LeBron a heroic victim and cast the blame upon a presumed racist white person,” Clay wrote here on OutKick six months after the alleged event.

It was an era when fake racism stories were popping up at a blistering pace. It was around the same time when Michael Bennett was proven to be lying about Las Vegas cops profiling him for being black. Video later confirmed that Vegas cops acted professionally during their interaction with Bennett.

Then there was the LeBron graffiti thing. On a mansion gate. Yet there was no footage – ever. Not six months after the incident when Clay emailed the LAPD to get a case update. Not a year later. Never. No surveillance footage from the mansion gate of the most famous basketball player in the world. There wasn’t even proof that someone painted anything on the gate.

“I’m a black man with a bunch of money and a crib in Brentwood, and having the word ‘n—–‘ spray painted over my gate, that lets you know I still have a lot of work to do,” James said at the time.

LeBron wasn’t at the house at the time of the alleged incident. His family wasn’t there. LeBron was just told of the incident. No photo ever emerged. Even TMZ was stonewalled.

Fast-forward to four years later and an incident from Wednesday night in Philadelphia where some knucklehead Philly fan poured popcorn on Russell Westbrook, who was heading to the locker room. Westbrook was furious, acted like he needed to be held back and it has since sent Bron Bron into a rage. 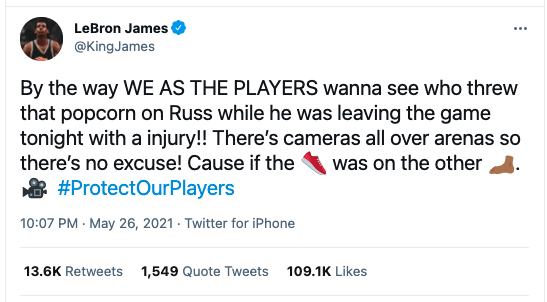 He wants surveillance footage of the fan. “There’s cameras all over arenas so there’s no excuse!” LeBron tweeted Wednesday night. Commissioner LeBron is on the case! Get ’em! Ban ’em for life! Bron Bron wants to cancel a guy for dumping popcorn on Russell Westbrook.

There was a time when Bron had no comment on the Los Angeles sheriff challenging him to put up money to find those responsible for ambushing two cops. But he sure is expending some energy to find the guy who dumped popcorn on Westbrook. Imagine that!

So here’s my trade proposal for LeBron:

(1) 13-second clip showing the fan pouring the popcorn. I know, it’s 2005 grainy footage, but it’s what we have to work with here.

Here’s your video, LeBron. Now give us the mansion gate surveillance, you fraud.

This fan should never be permitted in a #Sixers game ever again after throwing popcorn on Russell Westbrook while leaving court with injury. And they can track his ass down. No class! pic.twitter.com/ra029MaBDF