It looks like the Las Vegas Raiders will be sticking with Derek Carr as the starting quarterback for 2021 — or that’s at least the plan as of right now. Things could obviously change, but the team feels like there are bigger issues that need to be addressed.

The plan to proceed with Derek Carr has been confirmed by Adam Schefter with ESPN. Here is what he had to say about it.

“There’s no intention that they are willing to move off of Derek Carr at this point in time,” Schefter said on NFL Sunday Countdown, via Bleacher Report. “Now, Jon Gruden is always looking at quarterbacks and they also have Marcus Mariota under a two-year contract, but Carr played well this year and you have to figure they’d like to stick with him going into next year. No intention to move off him at this time.”

The combination of Carr and Mariota might not be overly exciting for Raiders fans, but things could be a lot worse. Just ask the Chicago Bears, Washington Football Team or even the New England Patriots.

Outside of a Dak Prescott, there isn’t a lot to work with on the free agent market. And with the No. 17 overall pick in the 2021 NFL Draft, it’s unlikely that there will be a quarterback of value available at that spot.

Things can always change, but as of right now, fans should get used to seeing Carr as the starter in Las Vegas. He finished the 2020 season with 4,103 yards, 27 touchdowns and only nine interceptions. It was his third straight season with more than 4,000 yards passing. 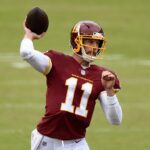 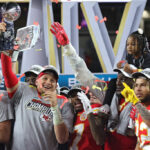