North Korean leader Kim Jong Un reappeared in the public eye Saturday looking significantly slimmer than in recent photos. Kim, 37, had not been seen for almost a month, taking another suspicious absence from the public scene.

Media outlets and experts speculate that Kim’s noticeable weight loss could signal deteriorating health. So much so, it has been the subject of in-depth analysis from South Korean media. Forensic analysis found that Kim’s frequently-worn, $12,000 IWC Portofino Automatic watch was fastened more tightly than before: 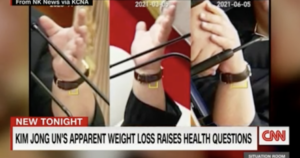 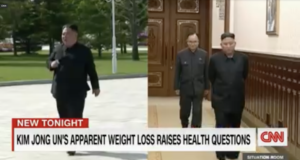 The dictator’s health has long been a subject discussed among global intelligence agencies. Experts have long assessed that Kim is at high risk of cardiovascular disease and heart issues, which killed both his father and grandfather while in charge of North Korea.

Following a mysterious three-week absence last spring, rumors spread that Kim had fallen seriously ill after undergoing heart surgery. Details on the matter remain scarce. Chief among them was a small mark on his wrist, which some medical experts speculated proved he had undergone a medical procedure. Another theory suggests Kim was isolated during the coronavirus pandemic.

The word “speculation” doesn’t go away.

A change of leadership in North Korea, which has nuclear weapons, would have significant geopolitical implications and affect regional security.

“If [the sudden weight loss] is due to a health condition though, the jockeying for his succession may already be happening behind the scenes, and that volatility could be trouble for the outside world,” Vipin Narang, a political science professor at MIT, told the Washington Post.

Some political scientists believe that Kim Jong Un’s sister, Kim Yo Jong, 32, would be his likely successor. Kim Yo Jong is said to be as ruthless and as concerning to other countries as her brother.

Like most storylines out of North Korea, the Kim Jong Un weight-loss story invites more questions than answers, more beliefs than facts.