You knew the stories would come along sooner rather than later. The Great Reddit Hedgie War of ’21 was going to have some big winners and losers. Some bodies would be left in the streets, while other bodies would head to beaches where they could buy up real estate. It’s nice to see the small players hit it big, and 5th grader Jaydyn Carr and his trading career are officially off to a hot start.

According to the San Antonio Express-News, Carr’s mother bought him 10 shares of GameStop stock in 2019 as a Kwanzaa gift as a reflection of Ujamaa, a principle of Kwanzaa that teaches cooperative economics. The shares were purchased at $6 and put away — until Wednesday.

Jaydyn hammered the sell button and cashed out for just under $3,200 on those 10 shares. The Express-News reports the young stock trader will throw $2,200 into his savings and start trading with $1,000. MarketWatch reports Jaydyn is thinking of moving some of his investment money into the upcoming Roblox IPO. 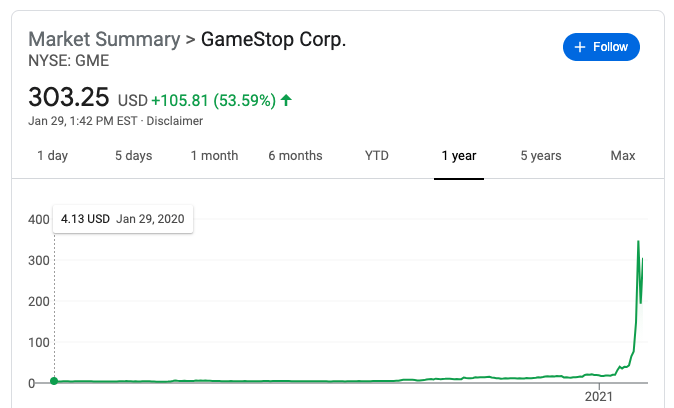 That’s right, even 5th graders are officially caught up in the trading game, and Jaydyn wants a piece of the action. Mom says she plans on having him learn how to read charts.

This week during the Great Reddit Hedgie War, GameStop stock hit a 52-week high of $483. As of Friday, short sellers continued to hammer $GME even after suffering $20 billion in losses this month, CNBC’s reporting.

“I keep hearing that ‘most of the GME shorts have covered’ — totally untrue,” Ihor Dusaniwsky, S3 managing director of predictive analytics, told CNBC. “In actuality, the data shows that total net shares shorted hasn’t moved all that much.”

The war rages on while Jaydyn is off looking for his next trade.