Hall-of-Famer Kevin Garnett is like the rest of us. He wonders if the Los Angeles Lakers have any clue what they’re doing.

Not exactly a riveting contingent. At least, not the splash the Lakers generally try to make. Garnett pointed that out, as only the always-direct KG can.

“Man are the Lakers serious?” Garnett posted to his Instagram story, via Lakers Daily. “They’re not serious about trying to better the situation with that list of coaches.” 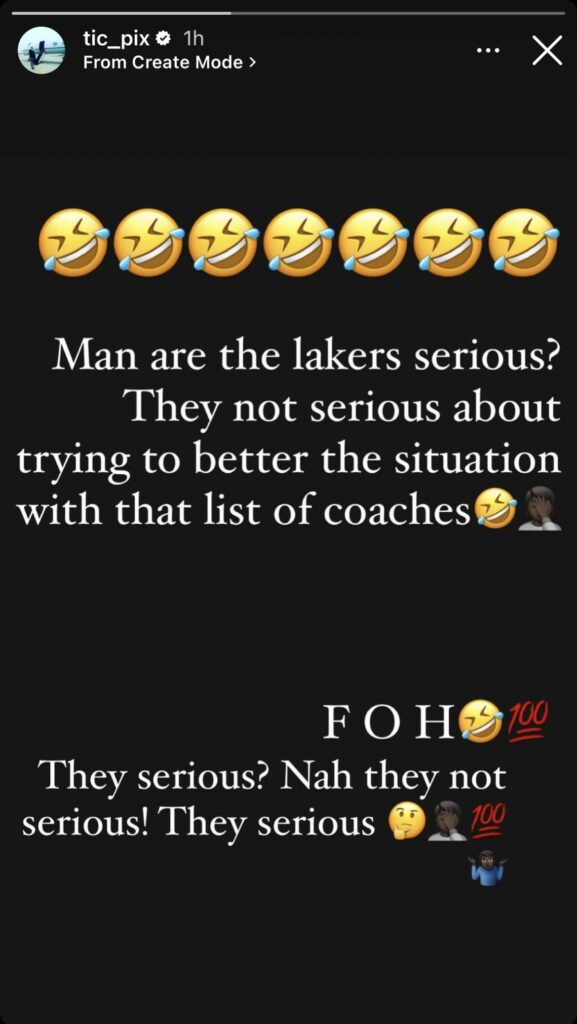 Garnett’s post was littered with emojis, especially the the one that signified he’s crying with laughter, indicating that the Lakers’ coaching search is one big joke.

Of course, the former Minnesota Timberwolves and Boston Celtics star isn’t the only one to weigh in on LA’s search. Everyone has an opinion on what the Lakers should do next when it comes to replacing Frank Vogel, fired after three seasons.

That includes the opinions of Magic Johnson and Phil Jackson, both of whom are serving as advisors.

“I think that, to me, they’re showing you, right now. Probably besides Erik Spoelstra, all the other three that’s in the final four are ex-players,” Johnson told The Athletic’s David Aldridge. “So, I think that says a lot about these young ex-players who command respect right away, who have done it before. I’m not saying it has to be an ex-player, but I’m saying you have to look at what’s going on. Most of the guys who are in the playoffs.

“But the most important thing to me is accountability. They must hold everybody, one through 15, accountable. And we got away from accountability. Guys never talked about that this season. It was always somebody else’s fault. I hated that. Never, ‘Hey, I played bad. Hey, It’s on me.’ So whether it’s an ex-player or not, but the trend is ex-players. But if not, I want a coach that’s going to hold everybody accountable. And, so, that’s what I would like to see.”