So, there’s a lot to unpack with this story, but here goes. Senator Kelly Loeffler is in a very tight special election in November versus fellow Republican Doug Collins (not basketball Doug Collins). Recent polls indicated they were separated by just two points in the race for the Georgia senate seat that Loeffler was appointed to earlier this year after Johnny Isakson left office. There are many other candidates but Loeffler and Collins are the two leaders.

Stepping back a bit, Loeffler, a co-owner of the WNBA’s Atlanta Dream, issued a statement in opposition of the league’s plans to honor Black Lives Matter. The Atlanta-Journal Constitution provides the specifics of her statement here.

Add her opponent Doug Collins to the list of the people ripping Loeffler, but it’s not quite for the same reasons she caught the ire of WNBA commissioner Cathy Engelbert and the WNBA players union. Instead, Collins essentially accused Loeffler of being performatively non-woke on this issue because she is involved in a heated election. When there was not a microscope on her, he implied, she let other progressive WNBA social initiatives like abortion and gun control.

Collins’ statement was shared in full by Sopan Deb of the New York Times: 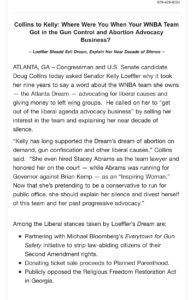 I can’t recall ever seeing a statement quite like that one in my life. Have you?