How long did it take before one of Judd Apatow’s buddies texted him to let him know his “He could have killed him” tweet after Will Smith cracked Chris Rock across the face was one of the stupidest serious tweets in the history of social media?

Apatow, the 54-year-old director/writer/producer of classics such as Anchorman, Talladega Nights, Superbad, 40-Year-Old Virgin, Knocked Up, etc., sat there in his mansion Sunday night and actually treated the Will Smith-Chris Rock War as some serious moment in the history of film and TV. Stop and think about the ridiculous stuff this guy has written into film over his career, and Apatow treated this like Putin invading Ukraine.

Hey Judd, run this stuff by your text group and let them slap some sense into your aging brain. 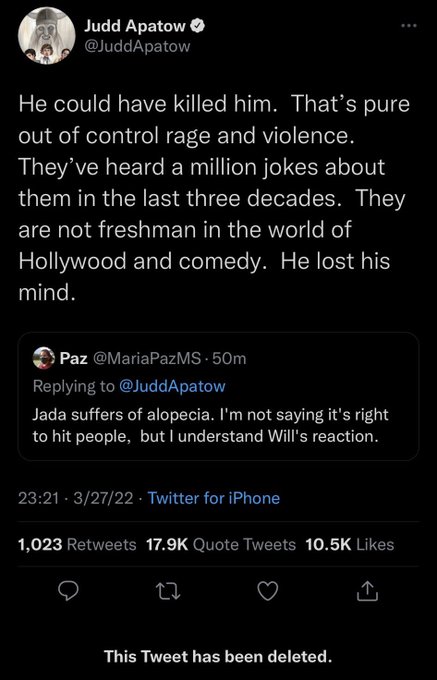 This wasn’t the only tweet that Judd deleted. He deleted everything relating to Will Smith and the Oscars. One of America’s great comedy writers of the last 25 years will look back on this one with incredible regret that he didn’t use this opportunity to break new material.

Here’s the unedited Will Smith slap of Chris Rock. This looks real. They bleeped it all out on the American version. pic.twitter.com/2fIoL05gO8

But this is where we are as a society — Judd Apatow cannot create a joke around Will Smith smacking the shit out of Chris Rock and then “motherf–kin” the guy in one of the most outrageous moments in TV history.

Huge mistake, Judd. Wait until Dave Chappelle works this into a 2-hour Netflix special and makes an absolute fortune off this moment in history. Dave will lead us out of the darkness that is Judd claiming Will Smith “could have killed” Chris Rock.

Those of us desperate to laugh will be waiting.

Hey @JuddApatow, I noticed you deleted your Will Smith tweets. Let me know if I got 'em all. pic.twitter.com/bSooFthahv