Missouri Senator Josh Hawley joined Clay on Outkick to discuss the NBA and China and whether or not he has heard anything regarding the letter he wrote to NBA commissioner Adam Silver. Senator Hawley also discusses the NFL allowing social justice helmet decals.

“There are widespread reports, very credible reports that Nike, many of their product lines and components of their products, the shoes, the shirts, the jerseys, all that stuff are made in concentration camps in China. These concentration camps are full of religious minorities, one in particular called the Uyghurs. They’re a religious ethnic minority that the Chinese government has put on trains, shaven, beaten, and shipped into these camps. I mean, does this sound familiar? That sounds like the worst of the 20th century. China’s doing it again. And Nike is using these camps to make these products and to make a profit. So, I want to know from Nike, from the NBA, from the NFL, from all of these big multinational companies, are you slave-free or are you profiting on slave labor, foreign slave labor in your supply chain? I think that’s a reasonable question. If you want to talk about social justice, let’s talk about that right there, right now. And let’s pledge to go slay free.” 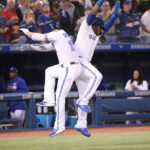 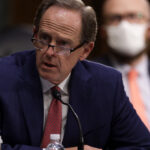