Social media caught wind Friday that NBA Hall-of-Famer John Stockton is featured in the new documentary, Covid and the Vaccine: Truth Lies, and Misconceptions Revealed. The doc has been promoted as anti-vaccine propaganda. Given Stockton’s former career, he broke an unwritten rule: he didn’t follow the lead.

While it’s doubtful Stockton has any value to add to the Covid conversation, the criticism arose from a video clip of mild commentary: 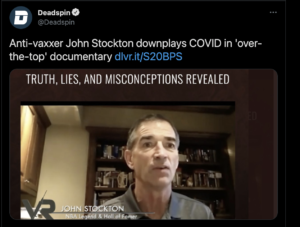 “This isn’t a virus cheating us of this opportunity,” Stockton says in the trailer. “It’s the guys making decisions saying, ‘No, no we’re too scared. We’re going to shut everything down. Sit in your house and be careful.’ My kids and my grandkids hearing these things and accepting them as truth when I know by my significant amount of research that it isn’t, it’s very frustrating.”

That’s it. That’s the clip that has social media calling Stockton an “anti-vaxxer.”

Come to think of it, everything Stockton says in that short clip — I have not seen the full doc — is correct. It is the guys making the decisions who are the problem.

Even the controversial documentary itself doesn’t appear problematic. On its website, the doc says it plans to ask the following questions:

How exactly is that anti-vaxxer propaganda? As always, don’t ask. Don’t even think about asking.

Those three questions should be answered. Multiple things are often true at once. The vaccine appears safe, yet questions remain. It’s not either-or, it never is. Of course there are questions. Yet we aren’t allowed to ask those questions.

In fact, we are not allowed to ask any questions until it’s too late. And those deciding what questions we may ask — Big Tech leaders, politicians, and “experts” — have proven track records of incompetence.

Then again, the Merriam-Webster dictionary changed its definition of “anti-vaxxer” to mean anyone who opposes laws that mandate vaccination. By that belief, Stockton likely is an anti-vaxxer. As am I.