John Ruffo remains one of the US Marshals’ 15 most wanted fugitives. In 1998, Ruffo vanished before starting his 17-year prison sentence for swindling banks out of over $350 million. No one could find Ruffo, leading to speculation he had died, left the country or changed his look and identity.

Ruffo’s disappearance re-emerged into the spotlight this month when he was featured as the subject of the recently-released second season of the ABC News podcast, Have You Seen This Man. Perhaps because of the renewed interest, the feds say they believe a tipster may have spotted Ruffo on camera at a 2016 Dodgers game.

Using age progression software, a man sitting in the front row of the game closely resembles what authorities believe Ruffo, 66, may look like at this stage. Take a look:

The Marshals Service said if the man at the game was Ruffo, it would be the first sighting of him since 1998 at an ATM in New York, before he fled. Here is that image: 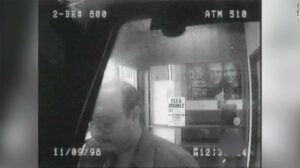 Investigators were able to narrow the seat down to Section 1 Dugout Club, Row EE, Seat 10, and identify the person who bought the tickets, but say the original buyer sold the seats afterward. So they have not yet been able to determine whether the man is, indeed, Ruffo.

Interestingly, Judd Bernstein, who represented Ruffo in the 1998 case, told NewsNation he does not believe that is Ruffo in the front row:

If Bernstein is wrong and it really is Ruffo, what a scene in the manhunt. After 20 years on the run, John Ruffo casually sat front row at a Dodgers game, and the sighting didn’t make the news until six years later. Should Netflix turn Ruffo’s life into a mini-series — and of course it will — that’s an episode alone.