President Joe Biden isn’t the only Washington elite having a pleasant summer week. As the Taliban seize control of Afghanistan, White House press secretary Jen Psaki has joined Biden in taking a vacation.

So if you are looking for answers about Afghanistan, don’t ask our president or press secretary. They are busy.

On Sunday, Fox News sent questions to Psaki’s White House email address and received an auto-reply, stating Psaki is not available for comment this week: 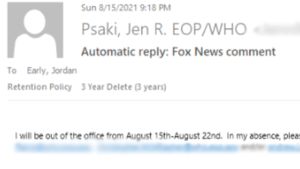 Got that? Check back in on August 23.

We are not accusing Psaki of running as Afghanistan falls to the Taliban. Her vacation was likely pre-planned. However, to go on the trip, amid an international crisis of this consequence, is questionable.

The situation in Afghanistan worsened over the weekend and was well on its way to disaster at the end of last week, when Psaki was still “in office.” By at least Friday, Psaki could’ve projected the Taliban’s path for the weekend. Yet she still took off for vacation. Everyday employees have canceled trips for far less than their boss’ own version of Saigon.

Though, if Saigon on Steroids isn’t severe enough for Biden to cut his getaway short, why should Psaki?

(Update: Biden will cut his vacation short and return to the White House for an address on Afghanistan.)

Psaki and Biden are accustomed to friendly coverage from the press. Unbeknownst to Biden — though not Psaki — the White House is no longer playing with house money. At least as it concerns Afghanistan, the press does not have Biden’s back. Nearly all of the mainstream news programs on Sunday morning condemned Biden’s handling of Afghanistan and called for his response. CNN and MSNBC have shared that same negative energy thus far on Monday.

When Psaki returns next week, she will be subjected to unfavorable questions from more than just Peter Doocy, perhaps for the first time in her career.

By the way, I wonder what kind of vacation Psaki took? Camping, RV road trip, or beach-front?