Not wanting to be the last one to jump on the Russian sanction bandwagon, the International Cat Federation announced this week that it was going to teach Vladimir Putin a lesson by banning Russian cats from international cat competitions.

You’re damn right this war just got serious. Not only has the international community dumped out Russian vodka, cut off Russian airplanes from flying just about anywhere besides China and the Middle East, but now it has come for Putin’s cats.

“The FIFe (Federation of International Feline) Executive Board is shocked and horrified that the army of the Russian Federation invaded the Republic of Ukraine and started a war. Many innocent people died, many more are wounded and hundreds of thousands of Ukrainians are forced to flee their homes to save their lives,” the organization said in a statement posted to its website. “We can all witness the destruction and chaos caused by this unprecedented act of aggression.”

Because it just can’t sit there and not do something to punish Putin, the organization outlined how it will ban Russian cats from international competitions.

The new rules state “No cat bred in Russia may be imported and registered in any FIFe pedigree book outside Russia, regardless of, which organization issued its pedigree.”

The organization also drew up a new rule stating that no cats belonging to “exhibitors living in Russia may be entered at any FIFe show outside Russia.”

In other words, if you live in Russia, your cat has officially been blackballed. No questions asked.

Now, these rules will be in place until May 31, 2022 and can be reviewed and modified, if necessary.

Over on Facebook, emotions are high as the cat community comes to terms with this bold decision by the cat federation: 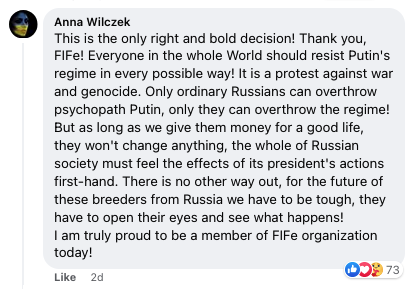 The lesson here is that you don’t invade a neighboring country and think your cats are just going to stroll into some show in Poland and dominate the show ring. No sir. Plus, do you think an international judge wants to risk the trauma associated with judging a Russian Blue for bone structure and then have to think of the animals that are suffering in Ukraine?

Putin’s economy is a wreck. There are million-dollar bounties on his head, his oligarchs are running for the hills, his conscripts just want to eat, and now he has lost the cat community.

While it might seem nuts to ban cats and cat exhibitors from international competition, let’s also keep in mind that the Paralympics has also banned Russian and Belarussian athletes from competing in the Paralympic Winter Games on the eve of the opening ceremony.

There’s fear, Paralympian organizers say, that a “deteriorating” situation in the athlete village could lead to violence.

That’s right, it’s a wild time in the world. Buckle up.