I refuse to start the day by going off on ESPN’s woke ESPYs, so let’s start with a feel-good Wiffle ball story

• Kenn in Grand Rapids, MI rescued today’s edition of Screencaps. At 7:55 a.m. ET, I was sitting here thinking about what to lead with, Kenn dropped into the inbox with a link to content that this country needs to see much more of.

Last night in Grand Rapids, the 7th annual Mission Field Wiffleball Tournament concluded after a two-day run that saw 200 kids from 40 teams compete for the title in the backyard of Mark & Julie Augustyn’s home.

“My wife and l love kids. We love to see them having fun and playing,” Mark told MLive. “Some of them are like our own kids. We leave the bats and balls out all year round and they play here every day.”

If you guys get a chance, take a look at the photos from this week’s event.

While ESPN held its ESPYs event, which is now a three-hour hate-fest focused on how horrible this country is, Mark & Julie Augustyn were busy holding a Wiffle ball tournament and showing us how great this country is at its core.

I’m begging you guys — send me more of the Mark & Julie stories that are out there. This is how you’re supposed to wake up in the morning, with feel-good stories that get the juices flowing to help you power through another day.

Once again, I’ll be in Birmingham for a Screencaps summit and we’ve decided it’ll take place Saturday at Back 40 at 3 p.m.

Send me an email if you need further details or want to let me know you’ll stop by for a beer. I see it’s going to be 93 and humid. It’s not like you’ll be at home on the patio. Come suck down some of Back 40’s AC.

My application was accepted!

• Rich G. from Frisco, TX writes in with a major dilemma:

I need some help from the Screencaps community. I just received a response from the Masters lottery and my ticket application was accepted!

What’s the strategy when I am there (must-do type stuff) and where should I stay? Thanks as I am sure others received notice yesterday as well.

I’ll forward your emails to Rich. Meanwhile, I’ll be hitting refresh on my inbox to see if my own glorious email shows up. Please, golf gods!

I hope that you are having a helluva day today. I just wanted to make sure that you saw what this absolute hero did on Google Maps.

And the Snopes lib libs have confirmed it. 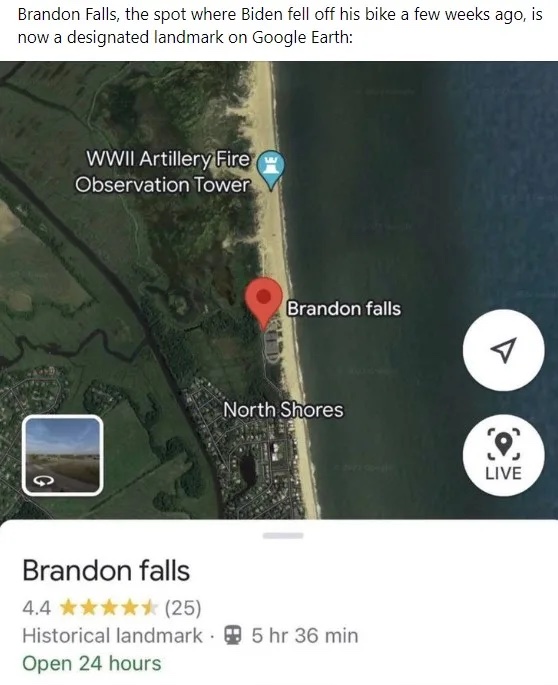 Your comment on being a proponent of PEDs in sports sparked an idea in my head.  What if the LIV tour does actually turn out to be a roaring success, so much so that other people with unthinkable quantities of money want to get in on the action?  What about PED-friendly baseball leagues?

I’m a purist when it comes to stats, so I’d rather the MLB stay clean, but I could sure be entertained by an off-season league full of ‘roid-ragers just bashing dingers and getting into some seriously rambunctious bench-clearing brawls.

It would be a great landing spot for washed-out sluggers who don’t mind the more unpleasant side effects of juicing.

I’m all about content, Jake. Let’s do this. Jack some bombs!

Louie, your vintage stories of Jason Varitek are always welcome

I just read your article about Papelbon throwing shade at Yanks fans on Twitter and referencing Varitek feeding his mitt to A-Roid (I spelled it right).  I’ll never forget that day.  I was a senior at Northeastern (in Beantown) and remember watching the game hungover on the couch in my apartment with my roomies.

We got fired up and rallied to head out for the evening.  We wound up at Daisy Buchanan’s on Newbury St.  That was a great little bar that has closed down since.  I was using the men’s room, at a urinal, when who walked in but Jason Varitek himself.  He was wearing a cowboy hat and was quite festive (drunk).  The Toby Keith concert was that night at Gillette Stadium and he must have rolled straight to the bar from there.

He of course had a group with him, no other Sox players.  He was pissing right next to me and I couldn’t resist breaking the “guy code” and engaging him in conversation.  I told him he was my hero for punching A-Roid in the face.  He just said, “Ok man.”  He was probably glad my drunk ass didn’t try to high-five him. lol

One of the most underrated benefits to living in downtown Boston is that if you drink in bars near Fenway during the summer, you’re likely to run into some Sox players now and again, some more than others (drinkers).  They are just like us, only with a lot more money.

And Louie wasn’t sure if I’d want to run that story in Screencaps!

These are the stories I DEMAND out of you guys. This is why people are hammering the refresh button between 8:30 and 9 a.m.

Speaking of vintage Red Sox stories, last week I spent 40 minutes on the phone with Curt Schilling talking dogs, baseball, and life. I know there’s been quite a bit of Curt content around here this summer, but I think we’re about to hit our stride with this baseball legend. More on that tomorrow.

• Paul B. in SW Florida writes in about the actress complaining about Arnold Schwarzenegger farting in her face 23 years ago:

Miriam Margolyes should be thankful she never wrestled against Andre. The things he did in the ring were much worse than AHNOLD farting on you. Google some of the stories. Or don’t, is probably the better option.

Actor Cary Elwes tells a classic Andre the Giant farting story at the :50 mark. “There was steam coming out of his head,” Elwes said.

Where are the vintage car fans?

Not going to give a lot of words here.  Just wanted to bring to your attention this event in Pittsburgh this weekend:  https://pvgp.org/events/schenley-park-race-weekend/

It’s one of (if not the) largest race event of vintage cars in the US.  A must for any vintage gearhead.

NFL’s Player Of The Year 2020🏈 pic.twitter.com/1wPkUm0jUa

The @Giants are throwing it back with their classic blue uniforms and helmets this season. ⏪ pic.twitter.com/tvasBANDgd

Elon Musk can turn #Rutgers into a blue blood! pic.twitter.com/Wkk8qSPMoB

OMG get this kid to training camp 🤣 pic.twitter.com/RvBaz8bEqs

This view is just insane and shows how fast Stanton can swing a bat pic.twitter.com/WMBFS02RZN

#ThisDayInGAHistory in 1993, the press box at Atlanta-Fulton County Stadium caught on fire and Braves players decided to snap some photos. pic.twitter.com/oUFRyiKKzR

It was built #OTD in 2017 by Rise Brands in Columbus, Ohio. pic.twitter.com/8o9aTxJS7y

Someone beat this photo. https://t.co/TPSh5JSGea

We'll need to see proof. Anyone know this guy in Mississippi? (via Bill C.) pic.twitter.com/aKfSLUQRvg

All for it as long as the meets aren't on league nights. pic.twitter.com/1L6K64rGGG

Yeah sex is pretty good, but have you ever caught a cross breeze perfectly in a tractor cab with no AC? pic.twitter.com/N452vMbOxy

I like unpretentious places that know what they are about and don't put on airs. The sign outside the Lost Horse saloon in Marfa just says "Beer," which is why it is my spiritual home when I'm out that way. One of my own photos, taken in 2015. pic.twitter.com/EurYAlm4zJ

“Now, throw it, throw it” 😂 pic.twitter.com/9dw1PjDvwn

A snail of a tale! @CBP Memphis seizes 8lbs of live snails from Italy.

Another round of real dogs – calico style. pic.twitter.com/qv65AZ3dfH