I’ll have a salad

I’m officially back from 48 hours in Birmingham, AL, and let me start by saying that I got home Sunday and took the family out to dinner where there was just one food option on the menu for me — salad.

Birmingham was like going on a football tailgating trip, minus the football.

For those of you who’ve been in a coma or on vacation, Brandon B. in Birmingham, who has commercial real estate business dealings in the city, brought me south as part of a retreat he was conducting with his employees. Brandon’s a Screencaps superfan and thought his employees should hear my nearly 15-year-old story of buying a $10 URL and eventually turning it into this job I have today.

So I fly down, show up at Brandon’s office, and there are all his employees in a conference room staring at a blogger from Ohio who’s there to give a talk and experience the new Birmingham, a city center that continues to go through a metamorphosis.

And as a bonus, we threw together a last-minute Screencaps gathering at a downtown brewery in a neighborhood that Norm in Huntsville couldn’t believe we chose based on the location.

You guys know I love bullet points and Screencaps analytical scientific data tells me you guys actually read the bullet points, so let’s dive right in.

• Since I grew up in Dayton, OH, went to college in Toledo, OH, and then got my newspaper start in Wilkes-Barre, PA, only to return to the Toledo suburbs, I’m used to steel, coal mines, industrial settings, cities past their primes, and cities that are constantly in revitalization mode. Birmingham wasn’t a shock to the system, but the pure volume of revitalization was unexpected. While northern industrial cities are known to rehab the neighborhoods around the sports complexes, Birmingham has not only figured out how to populate its sports neighborhoods but has energized its city center.

• The Uptown area of Birmingham where the new Protective Stadium, home of UAB football and the USFL (the SEC headquarters is across the street from the stadium), is seriously impressive, especially for those of you looking to do a sports weekend and have enough to do through a full weekend. Top Golf is across the street from the football stadium. Todd English Public Urban Bar is right there. I’m told the only other Todd English is on the Las Vegas Strip.

Put it this way, Georgia Southern football fans are going to go nuts in the Uptown neighborhood when they play UAB Sept. 17. Good luck to the bars around the stadium. 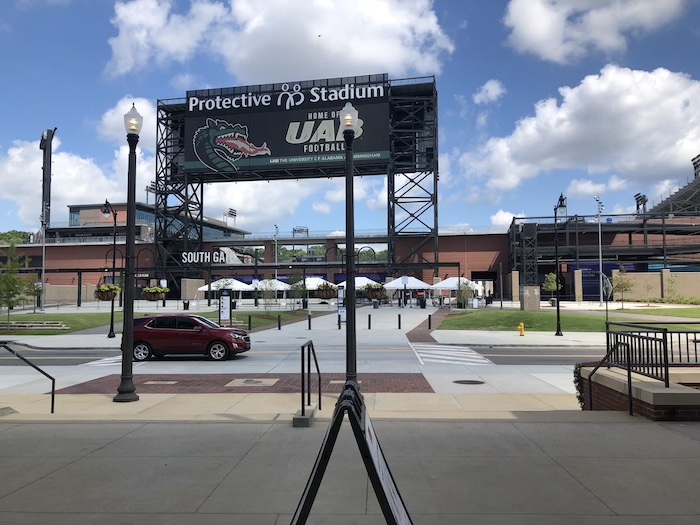 • I stayed at the Sheraton, which is connected to the Westin, which dumps right out to the front steps of the football field. On a walk from the Sheraton to the Westin, I came across this entrance where I tried to get in to have a chat with Sankey, but he was at home relaxing after a busy week in Atlanta. 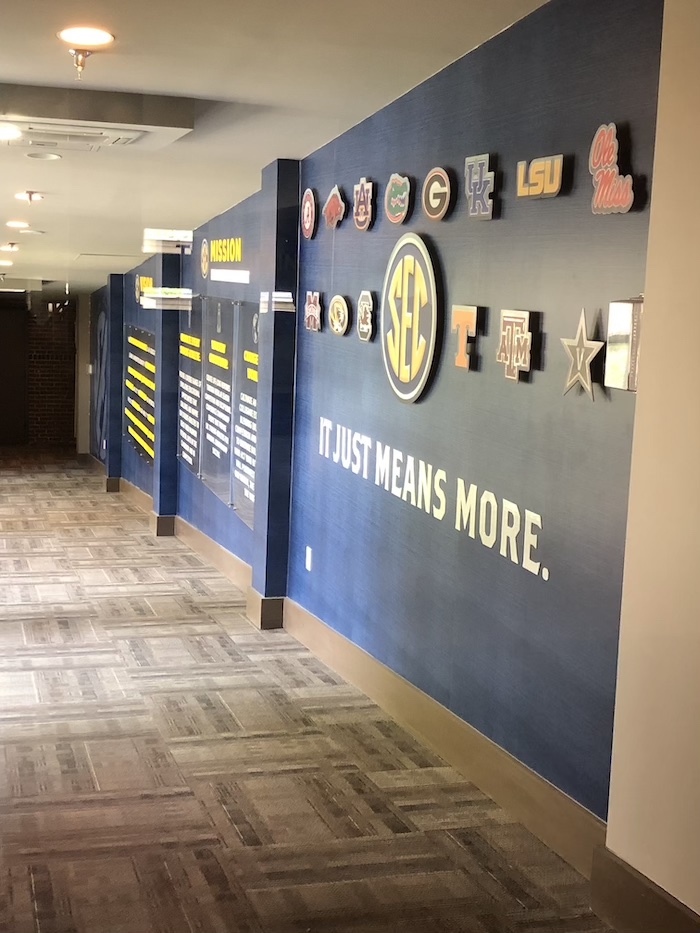 • I like to think of a true up-and-coming revitalized downtown is one in which there are multiple hotel areas within the downtown and not just a Hilton Garden Inn plopped on a corner without supporting businesses. Right in the heart of downtown, there’s a SpringHill Suites and across the street is a Publix and a Starbucks on the other corner.

• Is it safe? A quick Google search would tell you that Birmingham still has a serious issue with homicides, but so does New Orleans, which leads the nation in murder rate per capita, and tourists continue to pile into the French Quarter.

• We drank at the Avondale Brewing Company, Back 40 and the Paramount Bar right in the heart of downtown Birmingham and I never felt uncomfortable. There were families and single females in all three spots.

• Just like any other city, know your surroundings and stay in neighborhoods where you’re highly unlikely to find trouble.

• I had plenty. I’ll put the fine folks of Birmingham up against any northern city in beer consumption. Honestly, the city reminded me of Dayton where you can’t go 100 yards before finding another place to suck down an IPA. The beer scene caught me off-guard. I told Brandon that some of the neighborhoods reminded me of hipster Portland, OR neighborhoods, but there we were in the heart of Alabama.

• The Paramount burger lived up to the hype. Pizza at Back 40 didn’t disappoint. The only real issue I had was with the lack of fast-casual near the hotel. The Protective Stadium area could use some up-and-coming sandwich joint that stays open until midnight. If I’m going to drink so much, Birmingham has to give me a quick way to get grub at midnight with a 5 a.m. flight to Atlanta.

I know you guys were hoping this northerner got a big blast of Alabama heat in July, but it turned out to be a pleasant weekend. Friday night was steamy, but nothing different than Ohio in July. Saturday was another nice day. Hot, but not very humid.

No lie, I got off the airport parking garage elevator in Detroit and couldn’t believe the humidity level. It was disgusting.

• Brandon B.’s employees couldn’t have been more welcoming. Between getting me beers when I had a half-full glass, to the ladies jumping up on the golf simulator to hit the first golf balls of their lives, they were a blast during our Friday chat session.

• Brandon had me over for a garage beer Friday night featuring the legit Golden Tee home edition and darts. It was like a scene out of Ohio. Four guys pull up in their trucks and SUVs and they’re ready to have a beer and compete. And from there it’s on.

• It was like I’d known these guys for years.

They smoked me in Golden Tee, but I wasn’t a complete loser holding them up as they cranked shots over trees that I didn’t know were possible. And I shot darts fairly well for taking off approximately 20 years between dart nights.

The dart championship came down to a Game 3 scenario where my teammate Cole and I were up big, but we couldn’t close out the bulls and lost a heartbreaker after getting out to a huge lead.

• Our Saturday afternoon gathering might’ve been small, but it was full of heavy hitters including Jayson B. in Birmingham, Norm in Huntsville, new mom Jess in AL, host Brandon B., his buddy ‘Biscuit’ plus husbands/wives who joined in the very informal summit.

• These people read every damn word I write. Seriously. There are rare days where I’m just not feeling it and I’ll mail it in. Jess knows those days. Norm P. started bringing up column topics from like two years ago and my head was blown. Wait, what? I’m talking about people who could write the OutKick encyclopedia.

• My favorite part about meeting the Birmingham contingent was how they could answer just about anything about college football I could throw at them. Jayson B., an Auburn fan, has seen it all. He’s been a Braves season ticket holder. He’s seen hundreds of Auburn games. Between him and Norm, it felt like I relived the last 35 years of sports in Birmingham.

• New mom Jess, who is taking time off from her school teaching job, could be the first new hire in Screencaps history. Jess has a passion for this site that is unmatched. She’s right there in an OutKick trivia contest along with Brandon B. and Jayson B., who have been OutKick/Clay lifers going back years before I showed up.

• The prevailing theory from the blue checkmark elitists is that the typical OutKick reader is some sort of backwoods redneck who can barely function. I have news for the elitists, there wasn’t a person I met all weekend who wasn’t highly successful and/or highly educated. In fact, I was typically the moron in the room. I’m not even sure I’m allowed to repeat what Norm’s job is up in Huntsville.

• Meeting the readers has been a professional highlight this summer. I can’t say thank you enough to those I’ve met along the way. This column is an absolute machine right now and it’s because of how much you guys care about the real America that’s out there and just waiting to be discovered.

Now it’s my job to just keep finding it one city visit at a time.

Which city is next?

Jim Harbaugh and the khakis out in full force today at Pere Marquette in Muskegon as a part of the Wolverines trip across the state. Hear from the Coach and North Muskegon native Noah Stewart tonight on @FOX17. pic.twitter.com/2uZhnQxILb

"Who was it that wore the cowboy hat with Ron Jeremy?

Playing craps in El Cortez and then all of a sudden the place is catching on fire @PatrickE_Vegas pic.twitter.com/y4ByIsjcyf

Black bear yoga and the art of backscratching🐻

This yearling is a familiar one to me, I monitored her and her brother all last year from den out to den in. You may recall all their clips, very grateful to see her happy and healthy! pic.twitter.com/49zX0W9PE8

Here’s the most literal tree house we’ve ever seen. Listed for $3,800,000 in Pismo Beach, CA. pic.twitter.com/TtAyBwBVvA

A group of women all bought their husbands the same shirt and didn’t tell them…🤣 pic.twitter.com/cWXRY16E2x

Who would you call to help knock down this tray? pic.twitter.com/uLx47ZWG36

I can attest to this. I was the private chef. We ate lobster deviled eggs. pic.twitter.com/SNFIcrPKaE

Hey everyone, I just started my 2 week vacation with the family so I’m going to apologize now if I miss a few days here and there over that time but I’m going to try and stay on it so you all can get your dose of #DailyDale. pic.twitter.com/2Dqh3mD7A0