Before what is now known as Endeavor Group purchased Ultimate Fighting Championship (UFC) for $4 billion in 2016, UFC almost sold to Disney.

While UFC has since licensed its content to ESPN, which Disney owns, Disney has no control over the UFC events ESPN airs. ESPN doesn’t even have a say in who the broadcasts are, which is why Joe Rogan still appears ringside.

UFC, led by Dana White, is the opposite of Disney/ESPN. As a whole, UFC doesn’t take a political stance and encourages individual UFC participants to express their own views. This philosophy makes UFC authentic, brave, and unpredictable. Some UFC fighters have even — gasp — openly supported Donald Trump, which adds drama to some bouts.

While UFC caters to its base of sports enthusiasts who have a variety of political opinions, Disney does the opposite. It caters to its critics to ensure no one calls it racist. As a result, Disney is by the book, politically correct, and cowardly.

So imagine an alternate universe in which Disney and all of its wokeness ran UFC, the one professional sports league that has not caved to progressives. It’d look a lot different. If Dana White would have survived the initial acquisition, Disney certainly would have fired him after he defended Rogan in January.

“Guess what? This is fucking America You can have your own opinions about these things and you can voice them. That’s what this fucking country was built on. All these little whiny fucking pussies that don’t like it? Too bad,” White said of those trying to cancel Rogan for asking questions about COVID-19.

Under the control of Disney, UFC would resemble the NBA and WNBA, “Black Lives Matter” would appear in the middle of the octagon, and fighters would still be wearing masks while in the ring.

It’s amusing to imagine such a scenario because UFC never actually sold to Disney. But that doesn’t mean Disney won’t buy another brand. On Thursday, CNBC discussed the possibility that Disney could purchase WWE and Formula 1 instead.

“While Disney balked at UFC’s image, it’s easy to envision WWE- or Formula One-branded roller coasters and theme park rides for media companies that own them.”

Don’t scoff at the possibility of Disney buying WWE. Rumors frequently circulate that WWE could sell, and WWE president Nick Khan told The Ringer last month that WWE is “open for business.”

Streaming is Disney’s main priority moving forward, and there are few better streaming options than WWE. Since March 2021, more than three million Peacock subscribers have watched WWE content, and more than half of those three million subscribers say that they signed up for Peacock “because of WWE.” WWE would bolster the streaming bundle of Disney+, ESPN+ and Hulu immediately.

So buying WWE would be good for Disney’s business, but concerning for WWE’s quality. Just think of how bad WWE would be under ESPN’s control.

WrestleMania this past weekend was a spectacle, and Disney would have ruined it.

First, the two main events featured Stone Cold Steve Austin vs. Kevin Owens and Roman Reigns vs. Brock Lesnar. Three of those guys are white, and both orange skin and white skin are bad now. Sorry, Austin, you are white. That’s bad.

At ESPN, only one white man is allowed at a time. 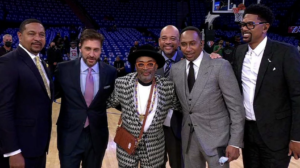 I think the inclusion of the white guy is what Stephen A. Smith calls “white privilege.”

WWE broadcaster Pat McAffee showcased his stardom at Mania in the ring and in the booth. Disney would have had Mark Jones on the call instead. Jones would have discussed Jacob Blake and police officers in between matches, as he does during the NBA and college football games he calls.

Disney, because of its reliance on the lucrative Chinese market, surely would have had a wrestler channel his inner JA Adande and defend the systemic genocide committed at the behest of the CCP.

And nothing with ESPN’s name on it can go on air without the privileged Mina Kimes joining in. That’s a rule. So maybe Kimes would have gotten into the ring with Charlotte Flair and beaten her ass with Sarah Spain as the special guest referee.

We can say for certain that Disney would have not allowed Roman Reigns to walk out to the ring shirtless. Instead, Reigns would have worn a “Say Gay” shirt with BLM written on his gloves.

Perhaps a Disney-run WrestleMania would feature Elle Duncan, the creepy SportsCenter anchor, begging for a school teacher to talk about sex with third graders. I wouldn’t doubt it.

We are lucky that then-Disney CEO Bob Iger ultimately nixed a deal to buy UFC because it was too “bloody and violent.” Now sit back and hope new Disney CEO Bob Chapek, a cowardly man, decides not to buy WWE and woke that up.