I hope Neil Young will remember, a liberal man don’t need him around anyhow.

At least that’s the stance one of the most liberal voices across the country is taking in the battle between Young and Joe Rogan.

As you likely recall, Young recently demanded streaming behemoth Spotify choose between him and Rogan — because Young has a bug up his wrinkly ass about Rogan’s opinions on vaccines. But now, Howard Stern — who has become a stodgy, thin-skinned shill for the man of late — has actually sided with Rogan. 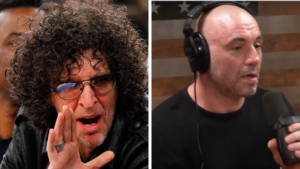 Stern won’t have to worry about Spotify pulling the plug on Rogan. As OutKick shared on Thursday, Spotify is in the process of removing Young’s catalog of music from its streaming library.

Stern’s decision to stand with Rogan likely comes as a surprise, if not a shock, to most readers who have followed Stern’s recent leftward lurch. Stern has frequently — and vehemently — disagreed with Rogan’s vaccine stance, treatment and general feelings on COVID.

Nevertheless, though cooped up in his Hampton’s basement and wallowing in COVID fear and self-loathing, Stern has accidentally stumbled upon some common sense.

“I am for any performer who can get any money and get paid,” Stern said of Rogan and his hugely popular and profitable deal with Spotify. “I’m happy for any young man or woman who can get paid in show business because so many people do not get paid. So those that can, God bless. It ain’t easy. It’s not an easy road. And attracting an audience is not easy.”

Rogan’s podcasts generate an estimated 200 million listens for Spotify each month, which is a very good reason for him to get paid.

“I’m against any kind of censorship,” Stern added via SiriusXM. “I really am. I don’t like censorship.”

Since Stern made these comments, few, if any, mainstream liberals have spoken out against Rogan. So even Stern did what he could do.

Maybe his conscience bothered him?