I’m up in New York City for OutKick meetings so apologies for no live show again tonight. I promise you, however, that I will be live next week for the finale of “House of the Dragon,” immediately after it ends.

Quiet in the realm.

With that in mind, we’ve finally reached King Viserys death and with it the succession battle we’ve all seen coming for weeks now.

By the end it seems clear we are poised for a dragon war, but first, the episode opens with the news of King Viserys death slowly being spread.

1. With the death of King Viserys, Queen Alicent tells her father, Otto Hightower, the king’s hand, that Viserys said he wants Aegon to be king the night before.

“His last words,” Alicent says, “and I was the only one to hear it and now he’s dead.”

While she’s mistaken about what he said, Alicent genuinely believes she’s advocating for Viserys’s wishes, but since she was the only witness everyone believes, logically, that it’s awfully convenient the king suddenly changed his mind and put her son on the iron throne.

2. In a pre-dawn meeting, the king’s council is informed of the alleged death bed change of heart as to who Viserys’s successor will be.

But members of the council, led by Otto Hightower, have already been secretly plotting to replace Viserys with Aegon.

Only Alicent didn’t know about this plot.

A 76 year old refuses to believe the king changed his mind and Sir Cristin kills him on the spot for questioning Alicent.

The Lord Commander attempts to arrest Cristin and then, upon being ordered to provide security, says he won’t obey any orders until there’s a king.

There’s an immediate argument made by Otto Hightower that all of Princess Rhaenyra’s family, presently at Dragonstone, should be killed to end their claim to the throne.

But Alicent rejects this argument.

3. Prince Aegon is missing as palace security remains a mess.

And now there’s a race between Alicent and her father to see who can get to Aegon first and influence him on what he should do about Rhaenyra.

Prince Aemon assists in the search for his mom, checking out a whorehouse he visited with Aemon when he was 13.

But we’re told that Aegon isn’t there because he doesn’t have interests in the women in the whorehouse, his predilections are, we’re led to believe, more sinister.

4. Otto Hightower demands all houses swear allegiance to the new king in a meeting.

Some refuse and are immediately escorted out.

A “Long live the king,” pledge rings out and we later see some of those rejecting the authority of the new king hanging from the palace ramparts.

These fights, awful as they are, prove the show still has the ability to shock.

Meanwhile, Aemon argues he should be the king, not Aegon.

“I’m next in line for the throne, should they come looking for me, I will be ready to rule.”

Aemon says he’s the one who studies and is prepared for the challenge of ruling and it should be him on the throne.

One woman knows where Aegon is hiding, she’s aware the king is dead and that Aegon will be the next successor. She’s paid off for her knowledge of the whereabouts by Otto Hightower, who wants to get to Aegon first so he can advise him to kill Rhaenyra’s family.

6. Queen Alicent requests the support of the Queen Who Never Was, Princess Rhaenys.

Having locked up Rhaenys to keep her from departing, she says the QWNW should have ruled and she offers her Drift Mark to be ruled by she and her granddaughters.

Then Alicent is asked by Rhaenys if she has ever imagined herself on the Iron Throne. Alicent leaves without answering and says the QWNW should ring the bell when she has an answer to her offer.

7. Aegon’s found hiding under a candle filled altar — how long were they planning on keeping him there, this entire plot line seems strange and forced — but there’s a duel over who gets to bring him back to the castle, Hightower’s allies or Alicent’s?

“I have no wish to rule,” Aegon says when he’s tackled by his own brother trying to run away. Aegon offers to sail away and never be found and we can see that Aemon is intrigued by the offer.

8. Back in the palace, having won the battle to find Aemon, Alicent confronts her father.

“Reluctance to murder is not a weakness,” says Alicent.

But Otto Hightower maintains the same argument he’s made for years, a battle over the throne looms so long as Rhaenyra and her family are still living. 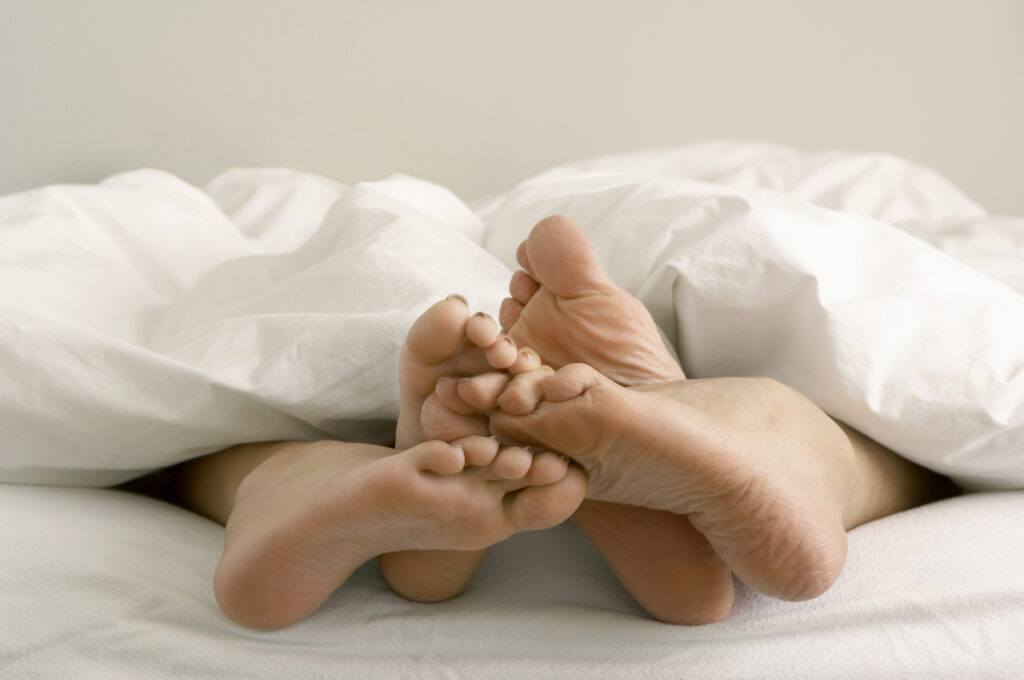 8 Larys Strong reveals his secret motivation for power all along, he’s got a foot fetish.

But Alicent has her own fetish, the dark and fetid world of secret killings that Larys undertakes upon her tacit acceptance.

“How did your father find Aegon first?” he asks, provoking Alicent’s desire for more information.

It seems there are spies in the palace and he has discovered who leads the spy ring.

As we speak, we notice that Queen Alicent has decided to put her feet up on the table between them. It seems the man with the clubbed foot loves the queen’s feet.

Having obtained her authority to do what’s necessary via his dark arts, Larys jerks off to the queen’s feet as she poses them for him in what may be the creepiest sex scene in Thrones history.

I have so many questions about how this foot fetish was discovered by Alicent and why she feels compelled to play along with it. Also, how ballsy do you have to be if you’re Larys to RISK JERKING OFF TO THE QUEEN’S FEET IN THE FIRST PLACE?

People get decapitated for saying the wrong word in the queen’s presence and this dude is just out here risking it all for some feet?

While most crave power, it’s incredible that Larys may be willing to kill his dad and brother so he can jerk off to the queen’s feet.

And, side note, am I crazy for not knowing what makes feet sexy? Like, I feel like with most body parts, even if you aren’t obsessed with them, you could see why guys like boobs or butts or legs. But feet? I just don’t get it.

Furthermore, do foot fetish people all like different types of feet or do they have the same foot desire? I’m just filled with questions here.

9. The Queen Who Never Was is snuck out of the palace.

Again, these security issues just keep happening and no one addresses them.

You can’t keep up with the princes and it’s already cost one of them an eye, now we’ve got Rhaenys locked down to prevent her from warning Rhaenyra about the new king’s coronation and then one guy comes in and breaks her out and that’s all it takes?

Also, do we really buy that no one would tell Rhaenyra yet? Not one person sent her a raven? She doesn’t have a single reliable spy feeing her information? And even if she didn’t, it feels like Daemon would for sure, especially given the fact that they know her father is in very ill health.

I’m just not buying the fact that the secrecy would work here.

10. Alicent lectures Aegon that he should have the decency to be grateful he’s becoming king.

In so doing, she sounds like every parent who has ever taken their kid to Disney World and had to deal with a misbehaving child.

Alicent says Aegon can’t accept her father’s council and kill Rhaenyra and then he gets distracted when she gives him the knife to hold.

“You’ll see,” says Alicent, who clearly sees herself as the shadow ruler and intends to manipulate the decisions of her son as she has done the same for Viserys.

As they ride towards the coronation, many of the King’s Landing residents are led to the crowning by the king’s guard.

The people cheer him loudly.

He pulls out his sword and jabs it heavenward in celebration as the adulation rains down upon him.

But just as Otto Hightower and Alicent are exulting in their well planned crowning coup, Rhaenys, who to this point has been disguised and in the public, escapes anew, runs to the dragon crypt and manages to hop on board her dragon and break him out, directly through the coronation, killing, it would appear, hundreds or thousands of people in the process.

And she does all of this in the space of about three minutes of on air time.

12. Aegon and his family are left defenseless and Rhaenys leads her dragon to them.

Alicent jumps in front of her son to protect him, although we know this wouldn’t work at all. It does, however, let us know that she’s willing to give her life for him.

The dragon opens his mouth and screams, but no fire emerges.

Frankly, I think it would have been more interesting if she had killed Aegon and his reign had lasted five minutes.

But just like that, we’ve got a war of the dragons. 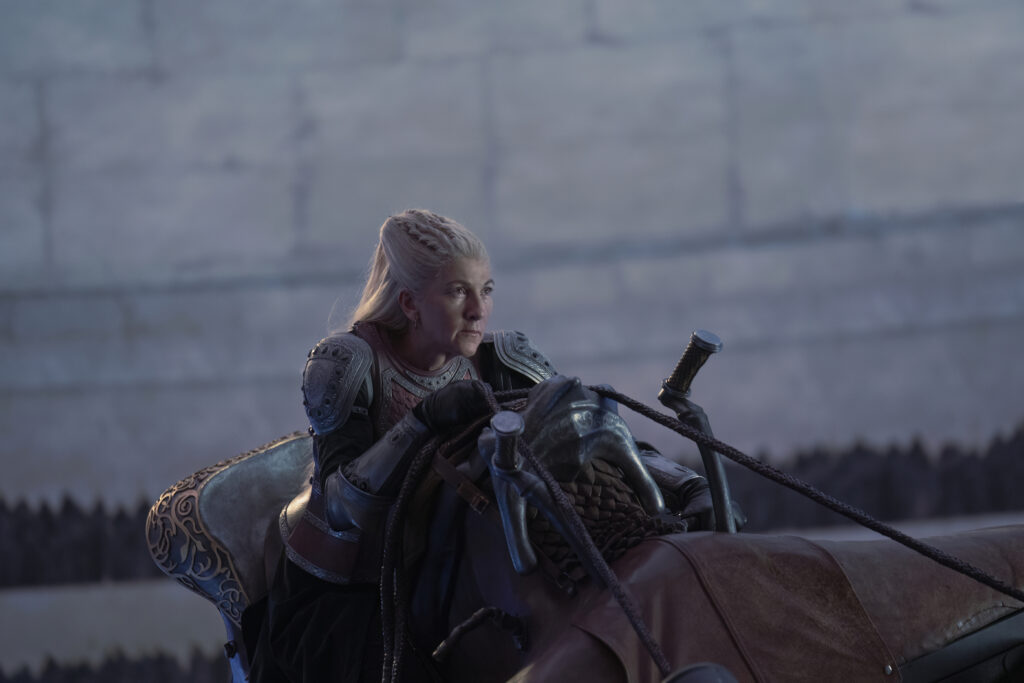 See you next week for the finale.