This weekend I’ll be in Birmingham, Alabama & you better come have a beer

There’s been some logistics to work on, but this coming Friday and Saturday I’ll be in Birmingham visiting with Screencaps readers, including Brandon B. who has been gracious enough to bring me down for a summit of sorts.

Where do you guys want to meet Saturday in downtown Birmingham? The day is wide open and Brandon is about as accommodating as it gets. I’m talking beers, sports if there are any on TV, and trading stories from the Screencaps world.

Brandon thinks Back40, Carrigan’s Beer Garden, or Cahaba Brewing Company are perfect fits for a meetup.

Saturday will be informal. I want everyone to fully relax. Flops, shorts, shirts, hats, drinks. I’m not signing autographs or making huge speeches. We’ll grab a few tables and hang out. This will be the most easy-going Saturday day drinking you’ve done this summer.

Who’s in? Put it on your radar.

Welcome to the slowest week in sports…how will you celebrate?

$1,000 is the asking price for a fourth-row seat in left field for tonight’s home run derby in Los Angeles that won’t include Aaron Judge, but it will include the likes of Juan Soto, Pete Alonso and Albert Pujols for the last time.

Like many of you, I gauge getting old by the number of athletes still around from when I was in college and during my immediate post-grad days when I would play fantasy baseball and football. With Pujols and Tom Brady both nearing the end, the age thing is officially becoming a concern, but I ain’t dead just yet.

Saturday, I sat here doing absolutely nothing (it felt amazing) and watched Pujols drill a ball off the Reds abysmal pitching staff and it took me right back to 2001 when Albert was winning a Rookie of the Year Award and crushing Reds pitching. It was like 22 baseball seasons haven’t passed at all (Pujols has a career .339 average against the Reds in 699 at-bats). It felt like time was standing still and I was working in the newspaper industry and catching Yankees games on Tuesdays and Wednesdays, my days off back then.

That brings me to this morning’s question for those of you who’ve passed the point of no return where the athletes of your generation have left sports. How do you guys find the joy in sports? How do you find a new athlete to root for? How do you reconnect with sports like baseball?

The last time my dad, 66, visited he started rattling off plays and names from a Reds game and I had no idea what he was talking about because I might catch two innings a night. The more I think about it, I should ask him this question about connecting with the sport after his generation of athletes retired.

I feel like football is easy because you find quarterbacks and watch their games. And it helps that I’m a Bengals fan and Joe Burrow — fingers tightly crossed — should be around town for a few years.

Tonight I’m going to start feeling that much older as Albert steps up to the plate to crush baseballs. Here’s to hoping he can make it out of the first round against Kyle Schwarber.

The Big Js are in Atlanta to sit and listen to coaches ramble on about their teams and all I can think about is how Brian Kelly will speak at the podium later today when he makes his big SEC Media Days debut. I assume the southern accent will be gone after how much shit the guy took for busting that out on day one in Baton Rouge.

Here’s how the OutKick team in attendance should play this: Let Brian do his opening statement, and take notice if the southern accent is present or history. Then you have a question that’s going to make huge headlines, but you have to get it out fast before one of these other SEC Big Js.

“Brian, what happened to the southern accent?”

Or, “Brian, talk about how your southern accent got even thicker over the summer” as a tribute to the TV reporters in the room who’ve perfected the “talk about” line of questioning.

Biggest story heading into SEC Media Days is whether Brian Kelly still has a southern accent.

This is also a good time to remind everyone it’s been 13 years since Clay Travis made a huge splash at the 2009 SEC Media Days by asking Tim Tebow about his virginity.

I’m worried that the ridiculousness of SEC Media Days has been lost as a new generation of blue checkmarks takes over and thinks that the common man wants to hear Xs and Os from these guys. The truth remains that we want salacious content like Clay asking the big question about Tim’s virginity.

We want someone asking Brian Kelly about the accent. It must happen later today.

Joe,  I love Screencaps!  I grew up in Delaware, Ohio and when I graduated Miami Ohio in 1989 moved to NC.  A great state if you are looking to extend the TNML season.  To get to the point, you absolutely should do the Scotland trip.

I had a chance to live in London for 2 years with work in the late 90’s and my goal was to play all the Open rota courses, so I took several trips to Scotland.  Most friendly people in the world.  The Scots are notoriously flint, they once invented a car that not only stops on a dime, it picks it up.

So you can find some reasonably priced lodging just outside the cities.  All the golf is great, just play fast.  In almost 40 days of playing over there in the summer I can only remember 2 complete rain outs.

You should definitely spend a day in Edinburgh, the castle is amazing and just near the entrance is a place that looks like a tourist trap called the World of Scotch, but it is a great primer for the novice Scotch drinker, get the package with the most tastes.

Eddie from Acworth’s son got his World Series ring

• You guys might remember the story of Eddie from Acworth’s son going out and hustling to get a job with the Braves. Eddie is back with an update:

My son and I are insane Braves fans.  This past season was incredible to enjoy with my son as we won the World Series for the first time since 95.  I never got to experience a title with my dad when he was alive-so I relished every moment.

But I have more to add to the story.

My son Clay, a 22-year-old college student, got a “job” with the Braves last year.  I use quotations because his “job” is to stand in front of the suites, behind home plate, watch the game, and tell people where the bathrooms are.  And he gets paid to do it.

He saw every game in person last year leading up to the title.

In March he got a message that all Braves employees would be getting a personalized World Series ring as they were part of the “team”.  This week he got to walk a red carpet on the field, got his ring presented to him by the president of operations, and got to have his picture made with the trophy.  I am so happy for him-what a once in a lifetime experience.

The Braves organization is the best.

Btw he brought his mother as he could only bring one guest.  He knew best-she took pics and I would have taken maybe 1. 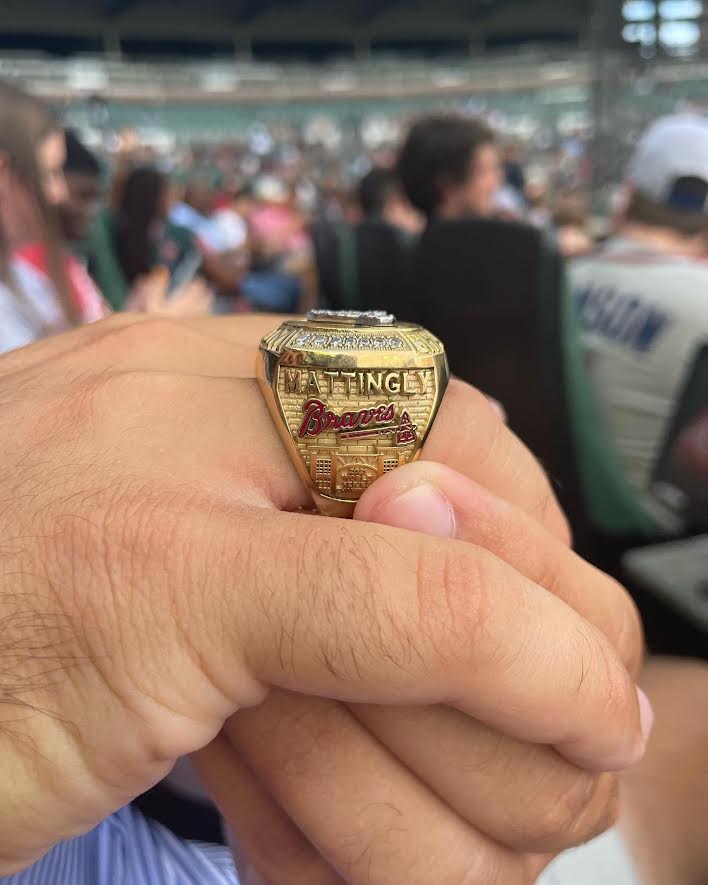 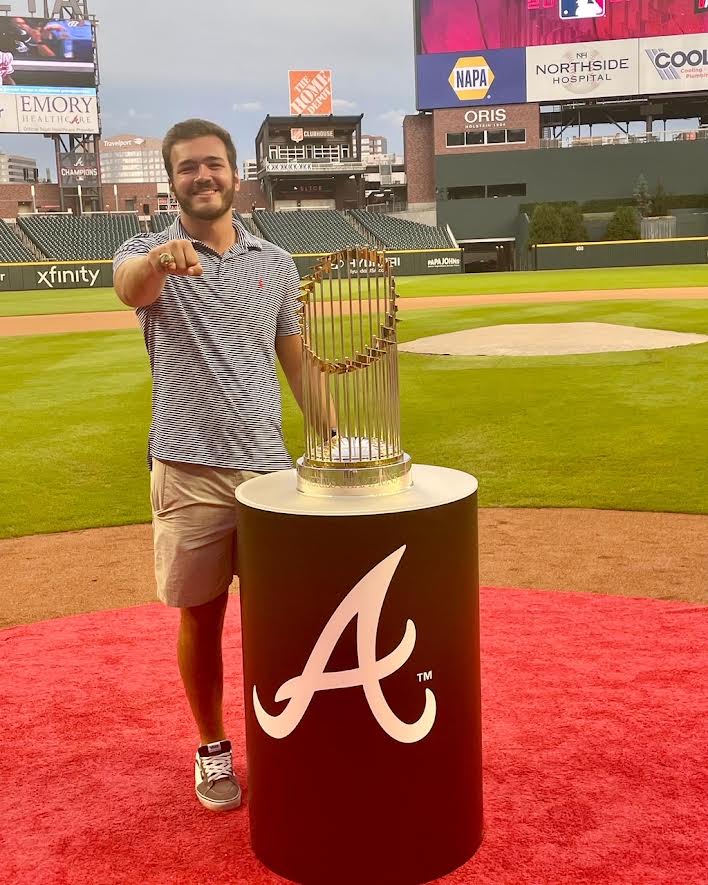 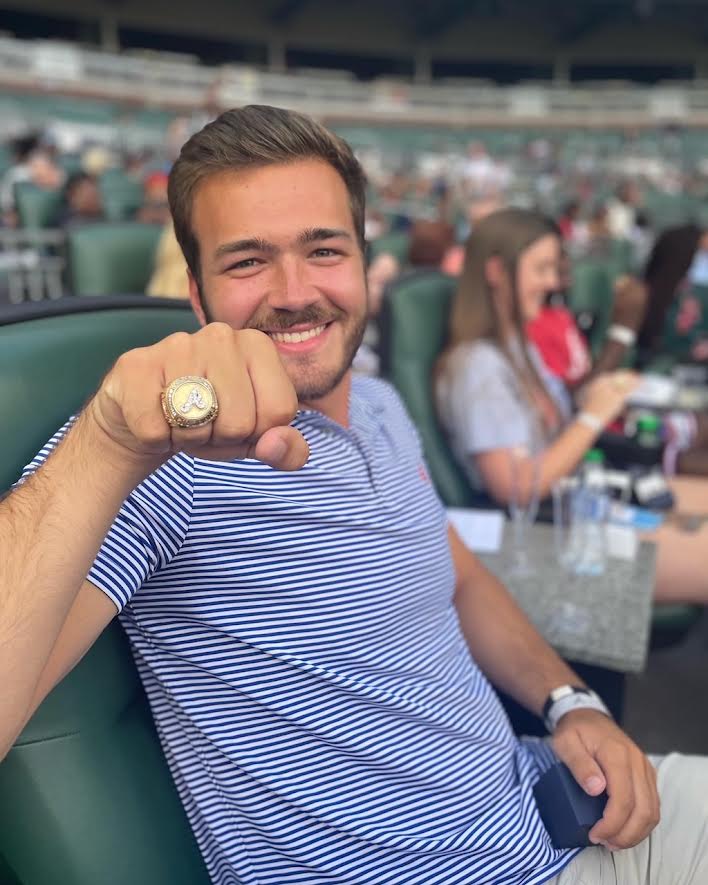 This just might be the best story of the week and it’s going to be hard to beat.

Let’s go out there and have a helluva day. I get that it’s going to be blazing hot at work. I get that the dog days are here. It’s still summer and there are not 14 inches of snow on the ground. Grab a water and stay hydrated. Zero chance we’re going to wish away summer.

Prior to this season, the longest win streak entering the break was 10 games by the 1975 Reds, 1945 Cubs and 1935 Tigers, all of whom made the World Series that year.

No matter what happens today at The Open, it will never top this moment. pic.twitter.com/n8UB0x3gmh

Just completed our 15th sweep of Detroit since 2016. 🧹 https://t.co/nrg1GiaEud pic.twitter.com/Umz7maUB1d

Texas is just being attacked from every direction at this point pic.twitter.com/T4i1nk2YgC

When you put out a bowl of ice for the local critters on an unusually hot day and one exhausted little guy falls asleep on it… pic.twitter.com/S2YtaP4u7D

Now that lumber prices are down and steel prices are up pic.twitter.com/NBOD84ouVf

Not every world record attempt goes to plan 😬 pic.twitter.com/8Tca6SmtRn