Those participating in the fall intrasquad World Series at Dallas Baptist can be brutal apparently. In the top of the 14th inning of Game 5, they heckled the home plate umpire so severely that the man reached his breaking point. The bases were loaded at Horner Ballpark Tuesday evening when the umpire decided to call it quits.

While taking incoming fire from the red team, the rattled umpire was heard saying “I’m out.” He walked down the first baseline to talk to a fellow ump before exiting the field completely.

But the show must go on, and the game quickly resumed. The blue team put up two in the top of the 14th, but the red team came back in the bottom of the inning and tied it after two runs walked in. The winning run scored on a sacrifice fly, and the red team won the Dallas Baptist World Series, a series that won’t be soon forgotten.

Let this be a lesson for umpiring crew everywhere. Even if you’re not scheduled to work behind home plate of a fall intrasquad game, keep a mask and chest protector in your car just in case. You never know when the home plate ump will decide to walk off into the sunset.

You cannot make this up.

In the Dallas Baptist Fall World Series game, the home plate umpire literally walked out and left apparently because he didn’t like the razzing he was getting from the dugouts. 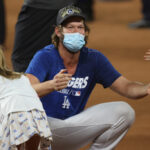 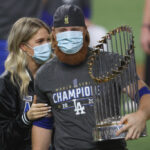