The 2021 news cycle never had a chance to compete with 2020’s. Though 2021 did not take the break that most experts predicted. 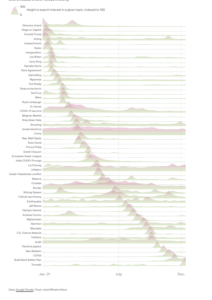 Google measures search interest on a scale of 0-100, reflecting the percent of total Google searches dedicated to a single topic.

For obvious reasons, “Covid-19 vaccines” never fell below a 5 on the scale. But more tellingly, neither did the term “shooting.”

While the media paid so much attention this year on Capitol riot, Donald Trump, and Derek Chauvin — Google search result suggests that the crime wave had Americans most interested. Looking at the chart, both “shootings” and “crime” steadily drew high search volumes over the past 12 months without noticeable dips.

Despite the lack of coverage, crime rates surged in 2021. By early December, 12 major U.S. cities had broken annual homicide records. Moreover, the reasons were rooted in frustrating political narratives, raising the significance of the story.

The Police Executive Research Forum found that homicide spikes were related to how local politicians treated and portrayed police officers. In response, the retirement rate in police departments nationwide jumped 45% over 2020 and 2021. And another 18% of officers simply resigned. Yep, you guessed it: these declines followed social justice protests and calls to defund law enforcement agencies after George Floyd’s death.

It’s hard to imagine a more depressing story than that. So no wonder Americans are more interested in that story than a Jan 6. committee.

“Border” and “inflation” were two other terms that maintained high search rates throughout 2021. The border and inflation are two topics that directly affect everyday Americans. And again, the press chose to minimize both crises, this time in favor of alleged racism. Notice neither “systemic racism” nor “white supremacy” made the list. That’s because they’re hardly existent in reality.

So the media outlets either have no idea what interests Americans or don’t care. I’m not sure which reason is more pathetic.

Looking ahead to next year, the border, crime, shootings, and inflation should remain atop Google searches. I also expect key figures involved in the 2022 midterms to rise quickly.

By the way, don’t only search topics on Google in 2022. Instead, try a variety of different search engines to find the information you need. You’d be stunned to see the differing search results between Google and DuckDuckGo.