HBO announced Monday it has begun production for House of the Dragon, the upcoming big-money, highly-anticipated Game of Thrones prequel series.

Fire will reign 🔥#HouseoftheDragon is officially in production. Follow @HouseofDragon for all updates. pic.twitter.com/lc3dhIcm5u

House of the Dragon is set 300 years before the events of Game of Thrones, focusing on the early stages of the Targaryen dynasty. The series is based on George R. R. Martin’s Fire & Blood novel.

While details remain limited, those that are known are promising.

Paddy Considine will star as King Viserys Targaryen, one of the more intriguing Targaryen characters. After Considine’s performance in The Outsider, I can’t think of a better option to portray King Viserys. (No, Aaron Rodgers doesn’t count.)

Emma D’Arcy as Princess Rhaenyra Targaryen.
The @HBO original series #HouseoftheDragon is officially in production and coming to @HBOMax in 2022. pic.twitter.com/lZ4ERgAy5H

Behind the scenes, Miguel Sapochnik will co-run the series with Ryan Condal. Hardcore Thrones fans know what this means: fire. No, literally. Sapochnik is the director of GoT‘s most famous battle episodes: “Hardhome,” “Battle of the Bastards,” “The Winds of Winter,” “The Long Night,” and “The Bells.” A Targaryen plays with fire, a Sapochnik plays with CGI.

HBO has also released teaser art of the show’s dragons: 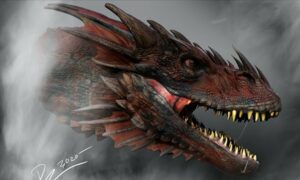 I think — keyword “think” — that the first dragon is Caraxes, who is eventually ridden by Prince Daemon Targaryen.

House of the Dragon is set to debut in 2022. Personally, I’m more excited about Dragon than Amazon’s upcoming Lord of the Rings series. You?

Game of ThronesLord of the Rings