Do something hard…on a college football Saturday

How did I take out my frustrations with that Ohio State performance? I decided to tackle putting together my son’s basketball hoop that we bought for his birthday. It didn’t take long for me to learn about the horrors of center-lock nuts. You might remember the story Indy Daryl told of his mom telling her sons to “Do Hard Things” in life. I don’t know if Daryl’s mom meant putting together basketball hoops.

That should tell you how bad those center-lock nuts were last night three hours into attaching the rim to the backboard. And I’m still not done. There are more of those bastard nuts to torque on. There’s more torture to endure and then I get to watch the Bengals after that.

Needless to say, I’m off this whole “Do hard things” train after this weekend. My shoulders and hands can’t take much more.

• Jeff McH. is yet another Texas A&M fan who loves Screencaps. At this point I’ve lost track of all the A&M fans who frequent my work. It feels good to be appreciated by a fanbase out there. Ohio State fans hate me because I’m not in their cool crowd and if you’re not in the cool Columbus crowd you’re a complete outsider.

As for A&M fans, they’ve welcomed me with open arms. I’m not sure why we’ve connected, but it might have to do with A&M fans being more of the common man. I’m starting to think that A&M fans mow their lawns while University of Texas fans hire out the job. It’s just a gut feeling at this point.

Checking back in from Texas.  I wanted to acknowledge your recent Texas A&M love in Caps and yes, I can assure you have a strong following down here.  A&M is located in College Station, TX and is one of the country’s few remaining military colleges with a current enrollment 69,000 STRONG; I can assure you true conservative values resound.  I myself am a proud ’92 grad and I just dropped off my son a few weeks ago, class of ’25 (that’s the plan at least).

As you are aware Alabama weekend is 10/9 and, although I don’t want to get ahead of myself, it is gearing up to be epic.  Tell Clay to gas up the bus and let’s beat GameDay to the prime spot, we’ll be stocked up and waiting.  As a word of caution, vacant hotel rooms in the Bryan/College Station area are basically non-existent at this point so I would call dibs on one of his foldouts now.

Keep up the great work.  Your posts are a true source of joy to me and I always look forward to reading you daily.

Glad I found your work on Outkick.  You bring much-needed humor and sanity to a world turned upside down.  I, like others, as you’ve noted, find myself hitting the refresh at 8 am to get the fix.  Keep doing you and bringing all the great work!

Appreciate you and Tim from Texas letting us in on the Gauntlet.  I’ve got two going now, The Glorious Glorianne Acres Gauntlet with some of my ‘hoodrat buddies, and another with some work degenerates called the Bunch ‘o Bums.  A much better idea than your standard fantasy league for those of us already stretched for time.  I’ve made up a spreadsheet to make the record-keeping easier if you or Tim from Texas find a need for something like that I would pass it along.

Love the TNML, although I’ve yet to participate.  One, I make the kids do the mowing (something about responsibility and contributing to the family and work ethic or so my dad said), and two, even if I did mow the schedules of those 3 would never let me commit to a certain day.  I dream of one day being able to join.

• Jason in Nebraska, a fellow Busch Light drinker, checks in and says:

Not a social media guy or Instagram guy. I love the pics though at the bottom of the page for sure.  Never have had Facebook, Instagram, or even MSN messenger back in the day…( Making money off the social media stocks though has been good) Appreciate the screencaps & TNML. Excellent stuff to read & to start your day off on. Just a 2nd generation owner of a lumberyard & construction company in the good ole state of Nebraska. Appreciate listening to Eric Church, Garth Brooks, Snoop Dogg, Eminem & everything in between. Got 5 kids 10 yrs old & younger ( 1 boy), a dog, & a wife ( & a 25 yr old sister in law on the “payroll” were not helping out my wife says….).

You’ve heard it many times before keep it up. In today’s world, it’s a choice to start your day pissed off at the total incompetence of our leadership or choose to read screencaps. I choose the latter.
I meet every morning with my guys at 6:45 to go over our jobs before they head out for a 10 hr day. It’s 5% work talk & 95% dude talk: football, baseball, weather, girls, etc. You won’t find better guys than I have, & they are the reason I go to work every day. If I don’t go sell, they don’t have work. It’s their families well being gets me up every morning.  I could screw off 20 yrs & be OK. I do it for them. Some of them “raised” me in the ways of the world 20 yrs ago. I’ll be forever grateful.

During the summer I always hire college guys for two reasons: try to teach them a skill that will benefit them in their future lives, & to have them tell their stories from their current life. Keeps the blood flowing for us guys in the grown-up world.

Being in the business of working for the public, & in the construction world today, it can be a f-in bear. ( you can’t get if sh*t right now & nobody in the supply chain cares).  That’s why I read your deal every day. It’s like I’m sitting on a barstool at my local watering hole & enjoying this great nation we have been blessed to be born & live in the mother lovin USA. Keep the good shit coming. God bless our military, the families of 9/11 & the people that get up every morning to make a difference in this world for the better. We do it in different ways, I’m glad I stumbled upon your gift a few mows back.

• I saved Jason’s email for today’s Screencaps because it just felt like a Sunday email. One of those emails where you can envision Jason getting up with the dog at 6 a.m. on Sunday morning to see the sun come up, maybe grab a cup of coffee and just calmly let the day begin. It’s that one morning where he can forget about things for a few hours before life kicks back into gear.

I hear from so many Jasons. I hear from women who are in the same boat. You’re just looking for a few laughs in the morning. Nothing too serious. Maybe something that becomes a conversation with coworkers. I’m honored so many of you choose to start your days with my labor of love. Someone is clearly looking down on me because this is one of the greatest jobs in the world. I literally get to edit together what your brain consumes at 9 a.m. ET.

Damn right, Jason. My wife and I sat at the dinner table last night after battling those center-lock nuts and explained to our 9-year-old son why the United States is the greatest country in the world. Then I went into the basement to get rested for one final battle with the basketball hoop. 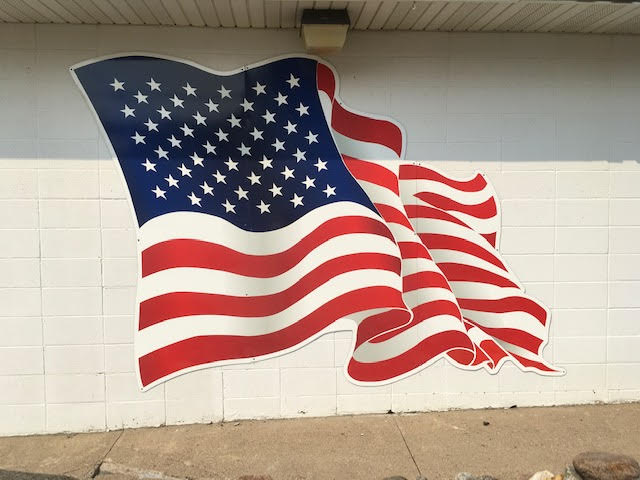 Tonight Shohei Ohtani became the first player in the modern era to hit a home run in the first inning and be the losing pitcher in the same game.

#OhioState fan believes #Michigan will defeat the cream puff #Buckeyes this year (and apparently that Ryan Day will be fired by that time). Tough day! pic.twitter.com/B7UROwmIjY

College football creates the most insane GIFS. I don’t know how you top the yin/yang of this: pic.twitter.com/CZxn7QTcBp

This banner will unite the country 🇺🇸 pic.twitter.com/wImJdDW8HF

Alright we won’t be questioning this ref’s calls 😳 pic.twitter.com/wO9inMWxJJ

This couple yelled towards @DaleJr. He yelled back “congratulations!”

They said “if you sign it we’ll name it after you!” 😂 Dale laughed but was a little busy during pre-race. #NASCAR pic.twitter.com/YQ30g5O1LN

Some have asked me what is the thought behind this photo? If you look closely you can see a #Bengals helmet that was in my office on the 101st floor of 1 World Trade Center. 🥲🙏🏻🇺🇸 pic.twitter.com/UQNicW6h7i

A post shared by Cash Money a.k.a Casharoni (@cashmoney_03)