Women’s golf sensation Danielle Kang admitted on Friday that she has a tumor on her spine.

Kang, who has spent the week trying to make the cut at the US Women’s Open, said that doctors spotted the tumor “a few weeks ago” and that she’s endured several treatment since then.

“I’ve gone through a lot of procedures so far, and with the process of elimination, we are narrowing it down,” she said Friday. “It’s going to take time.” 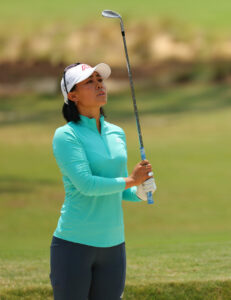 Doctors have not yet determined whether the tumor is malignant or benign.

Meanwhile, the health struggles have already taken their toll. Kang was forced to withdraw from the Lotte Championship and the Palos Verde Championship back in April because of the pain.

Despite those setbacks, Kang, 29, remains focused on the moment.

“My goal right now is to get through this week,” Kang said. “I wanted to make the cut. I wanted to play four rounds out here and then my focus was going to be getting better after that.
“The only thing on my mind has been to play the U.S. Open.”We wish Ms. Kang all the best in her health and career.