It was a good run, but it came to an end Thursday when Steve took me to the woodshed over the use of the Hannah Palmer photo that wore out its welcome here on Screencaps. Palmer posted her ‘Orgasm Donor’ shirt back on May 31 and ever since I’ve been including that photo when she’d appear in this space. After the first couple of days of the pic being used in Caps, a longtime Screencaps follower going back like 6-7 years asked me how long it would be before someone said something.

I told Wynn it would “probably two months” and also predicted I’d use it “10x” this summer. The date UNDER hit Thursday when Steve was finally fed up while the usage prediction was a push. “Just curious, how many times are you going to use the same Instagram post from Hannah C. Palmer (the one with the ‘Orgasm Donor’ shirt) on Screencaps? I think I’ve seen it about 10 times,” Steve wrote Thursday.

So with that, we can finally retire Hannah’s photo because the game is over. It was a good run. Hannah will continue to do her thing and I’ll continue to get her into the mix, but it’s new content from here on out.

Moving right along, let’s pivot over to the Bigfoot stuff I’m suddenly in charge of around here. I’m not sure where this is headed, but I’m perfectly fine with things getting weird. Thursday I threw out my email to the Bigfoot community to fish for some stories and it didn’t take long for ‘Ambush Amy’ to send in a dispatch.

“I wish I had an actual first-hand account to relate to you, but it is second-hand,” she writes. “A neighbor of ours kept us informed of bigfoot on a seasonal basis. We live in Carvers Creek, Wild Kingdom, Bladen County, North Carolina and the fact that something could be living in the woods and never be seen is a possibility.”

“Anky (Anthony) Savage relayed to us many times that he talked to BigFoot as they migrated through on a seasonal basis.  He said he could talk to them and they were peaceable creatures. They traveled in family groups, were secretive, and were hunters and foragers….

“Anky died a few years ago in a nursing home where someone could monitor his schizophrenia medications. He would slip out of the home once in a while and hitchhike back home.  I always wondered if he timed his escapes to see his friends.”

And just like that, we’re off and running with Bigfoot content on OutKick. I never thought garage beers, patio beers & mowing would become a thing and I certainly didn’t think I’d be getting Bigfoot emails, but that’s the beauty of this job. Every single day is different.

• Mark W. has some thoughts on the topic of food prices skyrocketing that I brought up earlier this week:

I believe food prices are absolutely going to rocket higher as the year goes on. The megadrought in the western states has severely impacted some of our major growing regions, meaning less product coming to market, Economics 101- when demand exceeds supply, prices go up. This has also impacted beef producers as they have thinned herds in response to the drought and rising feed stock prices. Couple what is going on domestically with what is going on internationally (for instance, a major drought in Brazil which will really raise coffee prices), and I think the consumer is in for a very nasty surprise.

So what’s the play here: Deal with it and eat the costs? Fill the garage freezer now or is it too late? I should be good on beer for a few months based on the cases I was buying at the start of summer for the Put-In-Bay golf trip. Hope the kids like rice. I might be buying one of those 50-pound monsters at Costco to get by this winter.

• I damn near ended up down a rabbit hole Thursday after my post on Shawn Kemp. All it took was one Google search for athletes who have the most kids. I texted my buddy Paul about Kemp and he warned me that soon I’ll be searching for Travis Henry, which I did. Never forget that Travis had AT LEAST 11 kids with 10 different baby mamas. The guy might not go into the Pro Football Hall of Fame for his on-the-field performance, but there should definitely be a wing for guys who gave it their all off-the-field like Travis. What an insane run that guy went on.

• I know it’s Friday and there will be a full roundup of mowing stuff in the TNML column, but I wanted to make sure to highlight this email from Chris P. who is originally a NW Ohioan. I really like where he digs into the psychology of mowing and what it means to those who have turned it into their passion. Chris might’ve just won Striped Waves of the Year.

I’m originally from Bowling Green Ohio and my wife is from Whitehouse and we now live in Wisconsin. I’m in the TV biz and have moved around a fair amount and lived for many years in SEC country. It’s good to be back in Big 10 country though I’m no fan of the cold. I enjoy your daily columns – as they give me a good laugh every day, I like the fact that you and your family live in Perrysburg and haven’t left the area for a bigger, more “cosmopolitan” area. Toledo-area folks tend to beat up on where they live. Columbus good – Toledo bad. Similar to when we lived in the Memphis area. Nashville good, Memphis bad. The Toledo area is a great place for families and there is a lot to do if you look for it. My folks still live on River Rd (Maumee side) and have for 40 years. I went to UT and then OSU and started my career at WTOL.

The TNML is such a great idea. I’ve included a column from today’s WSJ and a pic of my handiwork from last week. For years I’ve told friends that have lawn services that they are missing out. I read somewhere that the reason men like their lawns so much is the sense of accomplishment or completion they get out of it. At work, they may deal with things/issues that never seem to end. They don’t get that sense of completion – a job well done because it just rolls into the next day, week, or year. With a lawn, you see where you’ve been and where you need to go. It hits the satisfaction mark that we all need. 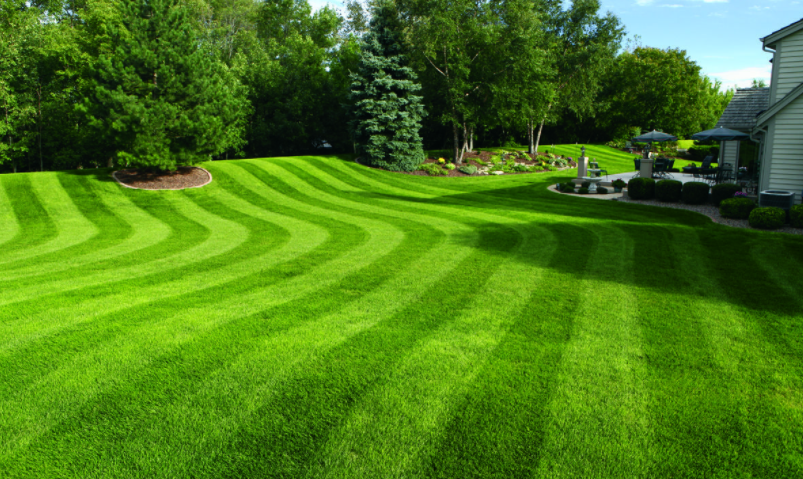 I just wanted to send you an email thanking you for grinding out fantastic content on a daily basis. I’m going through a very rough patch in my life right now so these articles help get me out of bed in the AM.

I also don’t own a home and thus have no lawn but TNML and all the great stories/pictures it generates has inspired me to begin working towards homeownership. Hopefully, by this time next year I can send in a submission!

Keep up the great work!

• Matt, just think of owning that house and sitting on the patio listening to music, the birds chirping, chimes blowing in the wind. Keep at it, brother. I’m not a life expert, but hard work will eventually pay off. And don’t be intimidated by guys like Chris P. putting on a stripe exhibition. Chris had to start somewhere. We were all TNML rookies at one point in our lives.

• Before I go this morning, I need to address the fact that our windows are open and it’s actually chilly this morning. In the 11 years that we’ve lived in this house, I can’t remember ever having the windows open and being a little chilly at 8:30 a.m. on July 23. I don’t know what Mother Nature is doing, but I’m going to need her to crank it up a bit. Bring the heat, ol’ girl!

The Yankees' Brooks Kriske is the first pitcher in MLB history to throw 4+ wild pitches in a single extra inning.

I’m not a soccer expert, but he might’ve embellished here. pic.twitter.com/8u0fJAJRIu

Before you retweet anything dirty onto the timeline, I caution you.. @nd4668 pic.twitter.com/0lveLt371V