Search
Cart 0
Menu
Follow us
Search
Cart 0
Total103 Before we got a chance to watch tonight’s NBA Draft, Shams Charania of The Athletic dropped awful news: Klay Thompson has suffered another “leg injury” and awaits further testing to assess the damage. Nothing’s certain yet, but this could be catastrophic to Warrior title hopes this year. Warriors star Klay Thompson suffered an apparent More 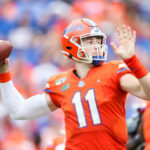