Gilbert Arenas and Javaris Crittention once held each other at gun point as Washington Wizards teammates. Now they speak on a weekly basis as Crittenton sits behind bars, accused of shooting and killing a woman in 2011.

“We talk once a week,” Arenas said via the “I AM ATHLETE“ podcast. “It’s just like when we were teammates — ‘Man, what do you think about this series? What do you think about this series?'”
“He just talks basketball. We just talk about basketball.”
Despite the gun incident, which saddled both players with nearly season-long suspensions, the former Wizards never took the gun threats towards one another personal, and were speaking shortly after their announced suspensions.
“His mother needed surgery for her neck,” said Arenas. “He asked me [for money] — because he knows I’m not going to hold it personal.”
“Even then, I took care of him,” Arenas told “I AM ATHLETE”. “Because nobody wanted to f*** with him at that time.” 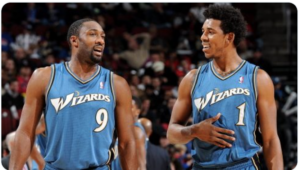 (Gilbert Arenas and Jarvis Crittenton with the Washington Wizards.)

And Arenas is still taking care of Crittenton today. The two ex-hoopers were teammates in Washington for just one season (2008-09), but remain close. With Crittenton currently serving a 23-year sentence, Arenas is still dishing out assists.

“Like, even to this day, I send him cell phones if he needs a new cell phone,” added Arenas.

Arenas, who last played in the NBA in 2012, can afford to keep Crittenton on the family cell plan. He earned more than $163 million (per Spotrac) during his career.