INDIANAPOLIS — It’s been a long time coming, but Georgia has finally won another National Championship. After 41 years of heartache, the Bulldogs finally did enough to slay the dragon which is Alabama. Now, Kirby Smart can finally take a deep breath and enjoy a win over Nick Saban, which had eluded him to this day.

We got to a point in this 33-18 win where many thought we could go a full four quarters without a touchdown, but that certainly wasn’t the case in the fourth quarter. For most of this game, we witnessed both teams squander opportunities to finish drives with touchdowns, settling for field goals instead. This also goes back to a first half where both teams finished with a combined 36 rushing yards, giving us one interesting show in the process. Nothing felt like it was executing, for either team, which showed on the scoreboard, with Alabama leading 9-6 at the half.

It was during the second half where Georgia looked to take over in a dominant way on the ground, something we didn’t see from them in the first meeting. The Bulldogs ran a total of 12 plays in the third quarter, but gained 113 yards and scored the first touchdown of the game. If you would’ve told me before the game that both teams would go without a touchdown through almost three quarters, I think everyone would’ve called you crazy. 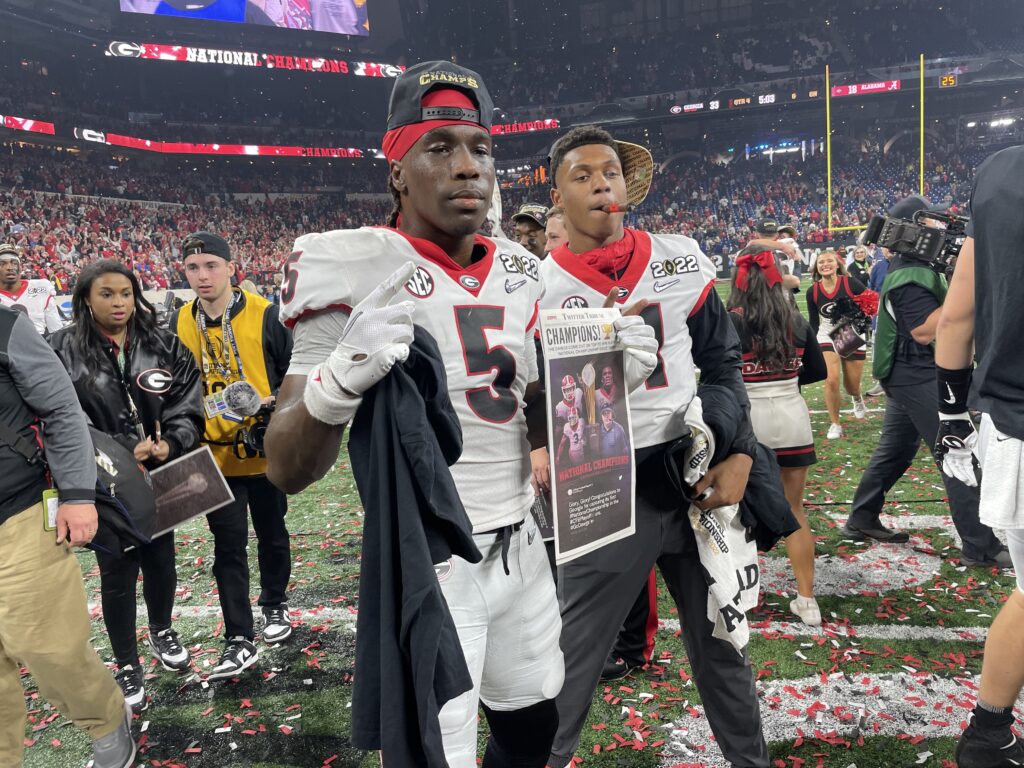 It was right after Georgia held Alabama to a field goal, where things went full crazy, just as the score reached 13-12. I imagine you’ve seen the play by now, with Stetson Bennett dropping back and what some folks thought was an incomplete pass turned into a fumble recovered by Alabama. To say this controversy had folks thinking this would lead to the Alabama win would be an understatement. The beer cans were flying from the bleachers and the boo’s were as loud as they would’ve been in Athens.

On the ensuing drive, Bryce Young led Alabama to a touchdown just four plays later and led 18-13, while Georgia fans were voicing their displeasure.

This was the point where most folks thought that the Georgia curse would continue and Kirby Smart would be leaving with another loss to Nick Saban. This was thought to be the turning point in the game, but Stetson Bennett and his offense had other opinions. 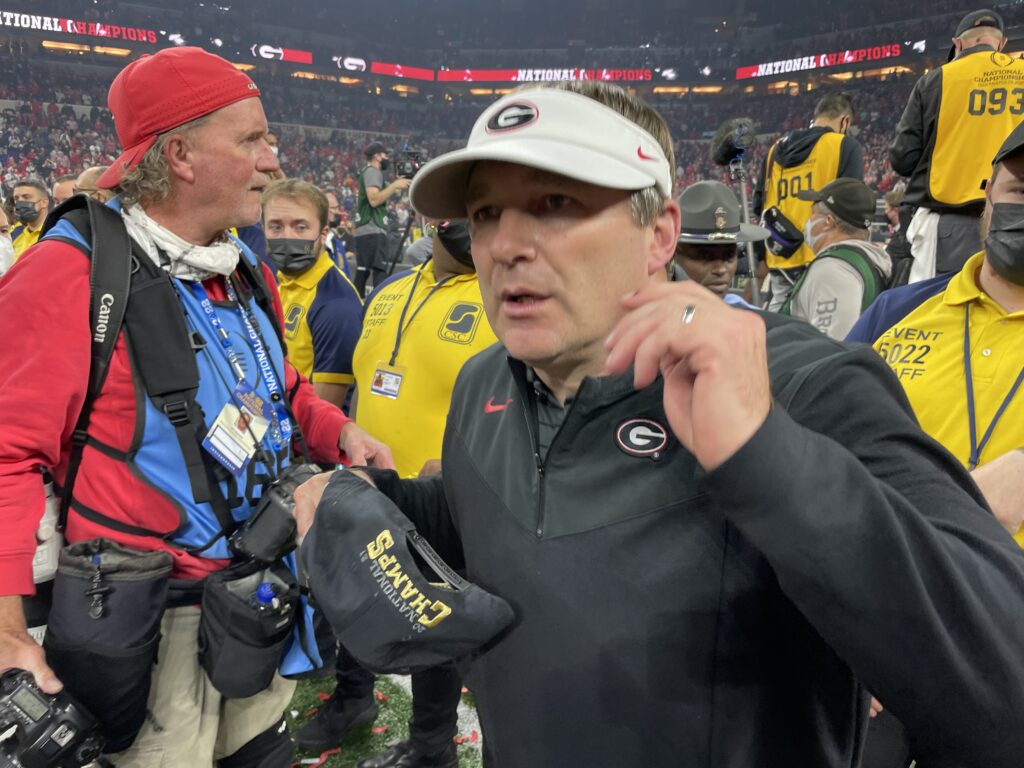 The Bulldogs were going to need Bennett to lead them down the field, even if that meant just handing the football off. For most of the night, it felt as if OC Todd Monken was trying to work the boundaries with Bennett, which is understandable at times. But, it was happening way too much and Georgia finally responded with life. The Bulldogs went 75 yards in 4 plays, as Stetson Bennett hit Adonai Mitchell for the 40-yard touchdown that sent the Georgia crowd into a wild frenzy.

It was at this point that the emotion was starting to swell up again for the Georgia fans, as the crowd, which had to be 75% Georgia, started feeling a potential victory, leading 19-18.

There are moments in football games where things could go in different directions or one team takes a lead that you think will be sustained. This is what it felt like tonight. When asked after the game if he could’ve imagined Stetson Bennett would lead them to this spot five years ago, Kirby gave a defiant answer to the question.

“I would’ve thought “hell yea we won a national Championship”, five years ago he was delivering passes like Baker Mayfield on the scout team.”

Just to add a bit more separation and on what was the most important drive of his career, Stetson Bennett hit Brock Bowsers for the 15-yard touchdown that extended the lead to 26-18. The Bulldog fans had now lost control of their emotions, as their team was one defensive stop away from winning the game.

Just like we’ve seen all season long, the Georgia defense stepped up again and finished off another opponent in dramatic fashion. Kelee Ringo intercepted a Bryce Young pass and took it 79 yards to the house, as Kirby Smart was running down the sidelines with Ringo, yelling at him to “Get Down,” as he mentioned postgame.

It was finally over and the Georgia players could start to celebrate on the sideline, along with head coach Kirby Smart. After the game, Nick Saban had this to say about the loss and Kirby Smart.

“If any team deserves – they deserve it,” Saban added. “They played great all year. We were the only team to beat them in the SEC Championship game. And we just couldn’t finish the game tonight like we wanted to. But I think Kirby has done a really really good job there. I congratulated him on the win. I’m really proud of him. And I’m proud of the way he’s been able to coach his team and the consistency that they’ve played with all year.”

We talked about it all week, how players like Jordan Davis and Nakobe Dean would need to be the main factors for Georgia if they were going to win. Tonight, that was the case, along with a player like Quay Walker. This defense proved why the regular season wasn’t a fluke. They dominated the Tide when it matter, bending but not breaking.

As for Kirby Smart, he can finally consider himself one of the best coaches in college football, though we already knew that. He finally won the game that’s been staring back at him for a number of years. He also won that National Championship as a head coach, which has been close, but not close enough in previous years.

After the game, Kirby had this to say to all the fans in attendance and the ones back home watching, as it felt as if Rocky had finally defeated Drago.

“We told them we were burning the boats. The only way home was through them”

There will be a party going on, for at least the next few weeks in the Georgia building.