According to a search warrant dated March 23 but just unsealed this week, Shihab wanted to retaliate against the former president for orchestrating the War in Iraq. To that end, he cased Bush’s personal residence as well as the George W. Bush Institute in Dallas, TX to try and uncover any security weaknesses. The warrant also claims that Shihab wanted to smuggle in four other Iraqi nationals — currently located in Iraq, Turkey, Egypt and Denmark — through the Mexican border for the purposes of carrying out the deed and was willing to pay $15,000 to bring them to the US. 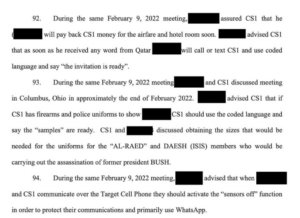 The FBI became aware of Shihab’s plans through the cooperation of two informants. One informant told the FBI that in November of last year, Shihab inquired how he might “obtain replica or fraudulent police and/or FBI identifications and badges” to infiltrate areas otherwise protected by the Secret Service and whether designated perpetrators might be smuggled back out of the country once the hit had been completed.

To assist in their investigation, the FBI had also identified Shihab’s “pen register” on the messaging platform WhatsApp to help them track his contacts and communications. According to one informant, Shihab regularly participated in chat rooms related to the former Iraqi political party Baath and the terrorist organization ISIS, which have both openly professed hostilities against the US.

Because Shihab has not yet been charged with any crime, Forbes has not released the full search warrant.

“President Bush has all the confidence in the world in the United States Secret Service and our law enforcement and intelligence communities,” said Freddy Ford, the Chief of Staff at the Office of George W. Bush.

Shihab claims membership in “Al-Raed,” which means “Thunder,” a group that has been linked to former Iraqi dictator Saddam Hussein. He has been living in Columbus, OH since 2020 and has petitioned for asylum status. He also claims to have targeted US servicemen and women in Iraq between 2003 and 2006 by detonating vehicles full of explosive material in their vicinity.

According to Fox, charging documents will likely be unsealed after he appears before a federal magistrate, and a statement from the U.S. Attorney for the Southern District of Ohio should soon follow. Stay tuned to OutKick for further details about this story as they develop.