On the morning of January 20, 2021, the inauguration of Joe Biden as the 46th president of the United States, media personalities, executives, and producers breathed a loud sigh of relief. The four-year-long quest to bring down Donald Trump had just officially ended successfully. The industry that had most benefited from Trump’s presidency was happiest to see him go.

Then a realization set in, a realization that was predictable but put on the backburner. “We will worry about that when that time comes.” That was losing President Donald Trump as a topic. The time was two weeks into Biden’s presidency, then a month in, and now more than 100 days in.

Most presidencies are primary topics on cable news networks. Trump’s, meanwhile, ushered in a new iteration of coverage, a lucrative, partisan pivot that saw viewers leave sports, scripted TV, and reality programming for a more unpredictable sport, drama, and reality. With Trump in the A, B, and sometimes C blocks, ratings smashed old records.

Records are not smashing with Biden. Via data from The Hill, here is the trend of primetime ratings during the first 100 days of Biden’s presidency: 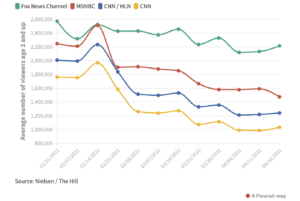 Instead, focus on the separation, the personalities and the shows that have weathered a storm that continues to inflict damage across the cable news industry. Don’t just notice the losers, but find the few standout winners. What do these trends mean?

Without Trump to keep viewers on a news channel throughout the day, the individual personalities and formats of cable news programs are more crucial than they were just a few months ago. Viewers are more selective in what they watch. They tune in for a show, and they tune out when a show ends. Through President Biden’s first 100 days in the White House, there are three winners: Tucker Carlson, Rachel Maddow, and The Five.

Those winners could change, but I don’t expect them to. Each of their newfound or continued success is the byproduct of a changing landscape.

Critics who referred to Carlson as a staunch Trump supporter were always inaccurate in their assessments. As I explained last July, Carlson did not attach himself to Trump. He attached himself to issues that arose during Trump’s reign. Carlson didn’t give nightly opinions on Trump, but on cancel culture, Big Tech, the culture war, race, academia, social division, and the establishment. None of these issues disappeared when Trump flew to Mar-a-Lago on Jan. 20. And they won’t. Carlson’s opening monologues don’t need Trump’s presence in the Oval Office.

Though Carlson’s rise began in 2017 when he succeeded Bill O’Reilly as host at 8 pm on Fox News, he didn’t succeed O’Reilly as the biggest draw in cable news until this past fall. In the months leading into the 2020 election, Carlson was still in nightly, down-to-the-wire viewership battles with Sean Hannity. Hannity ultimately edged out Carlson for the 2020 win.

Since February, it’s rare that Carlson is not No. 1 in cable news, usually by a few hundred thousand. In April, Tucker Carlson Tonight was the only show to average over 3 million viewers, averaging 300,000 more viewers than The Five, April’s second-highest-rated program. Fox News ought to think “Next Tucker” when it selects a permanent host for 7 pm.

Rachel Maddow is also a distinctive needle-mover, as evidenced by the consistent disparity between her numbers and her lead-in and follow-in programs. In April, MSNBC drew 1.6 million viewers at 8 pm and 1.7 million at 10 pm. But at 9 pm, Maddow’s hour, the network averaged 2.7 million.

Maddow’s coverage of Trump and Russia brought in new viewers, many of whom aren’t leaving. Viewers used to tune into Maddow for that storyline, but now they tune in for Maddow. There’s a difference.

Given the declines elsewhere and shifts in interest, Carlson and Maddow’s influence — though polar opposite — will expand without Trump in office.

The Five finished the month as the second most-viewed cable news show, which is eye-opening. On May 7, it ranked No. 1 in the coveted 25-54 demographic. The Five airs at 5 pm ET, that isn’t primetime. Half of the country is not home. It airs at an unappealing 4 pm in the Central time zone. Yet it’s not hard to understand the reasons for the show’s success. The Five is different. Its format is different. Its selling points are different.

The Five’s identity isn’t topic-reliant. It’s viewed as a light-hearted, sometimes feisty panel show. That doesn’t change from president to president. Over 24 hours and across three different channels, there’s an appetite for more than one or two hosts looking into the camera and interviewing a bunch of random guests, and The Five has tapped into that opening in the market.

CNN, on the other hand, has no standout winner after 100 days. CNN’s decline is particularly noticeable because it started off with a smaller base than FNC and MSNBC to begin with. Slashing 42% off CNN’s averages has resulted in troubling daily rankings. Several CNN programs have fallen below a million viewers of late. While CNN was never going to sustain the primetime bump to 2.7 million viewers it saw in January, the network has fallen further than predicted. More than two-thirds of its audience has checked out recently.

The drop CNN is experiencing is profound. On Friday, not one program broke 900K total viewers. Prime averaged less than 800K overall.

For comparison, the network averaged 2.74 million viewers in January, so we're talking about more than two-thirds of the audience – gone. https://t.co/a4f14QXStm

In a Biden presidency, CNN faces more uncertainty than FNC and MSNBC. Trump furthered the directions Fox News and MSNBC were already heading in, but he changed CNN’s identity in 2016. CNN applied to Trump the blueprint that right-wing talk radio used during Bill Clinton and Barack Obama’s presidencies. That approach no longer works now that Trump is gone.

What’s interesting, CNN has not gone back to its pre-Trump formats yet. Instead, it has tried to replace Trump with another “boogeyman,” to use one of the industry’s favorite words. New options include Tucker Carlson and select GOP politicians who CNN says are trying to suppress black people from voting. Sportswriters scrambled to fill a similar void when Michael Jordan left, with similarly lackluster results.

Should CNN stick with this strategy, it needs either Donald Trump or Florida Governor Ron DeSantis to win the Republican nomination for 2024. Perhaps the network will get its wish.

Joe Biden’s first 100 days as president is a preview of the landscape, not a glimpse of it. Though a few shows have thrived under Biden, most have not. There’s not a clear enemy nor a definitive hero. Biden is not a visionary, so he’s not a sufficient villain for the Right, and an old white male will never be a savior for the Left. Those shows trying to vilify or lionize Biden are failing.

They’ll never admit it at their New York Christmas parties, but deep down, most cable news hosts and executives miss Donald Trump. And he has been out of office for only 100 days.