Monday night, Fox News launched its new nightly 7 p.m. opinion program, Fox News Primetime, which has replaced the news hour formerly hosted by Martha MacCallum. As OutKick first reported, Brian Kilmeade got the first crack at the opening, and a rotation of Fox News personalities will follow until a permanent host is named. Fox News has since confirmed that Maria Bartiromo, Trey Gowdy, Mark Steyn, Katie Pavlich, and Rachel Campos-Duffy are also set to host the show in the coming weeks.

Media sources tell OutKick that Kilmeade is currently viewed as the frontrunner, though a decision is not final. On Monday’s debut, Kilmeade blended opinions, headlines, and light banter in a strong launch. With his versatile presence, chemistry with marquee Fox guests and 20-plus years resume with the network, Kilmeade makes a strong case for the permanent job.

Should he ultimately land the role, it’d presumably open up valuable real estate on Fox & Friends, the show Kilmeade has co-hosted since its 1998 debut. In the TV industry, moving a stalwart from a popular show to a new venture can be risky, but the network has already positioned Fox & Friends Weekend co-hosts Pete Hegseth and Will Cain as high-upside potential replacements for him.

The five other names scheduled to host the show indicate that Fox News is not seeking the next Tucker Carlson, who caught fire in a similar role in 2016. Fox has not chosen candidates best suited to deliver signature opening monologues, the primary selling point of Tucker Carlson Tonight, Hannity, and The Ingraham Angle. Perhaps the network believes that a fourth such show would dilute its 8-11 programming, but even so, this is a missed opportunity. Fox News should at least see if Jesse Watters, Will Cain, or Pete Hegseth could give the network a fourth star host. 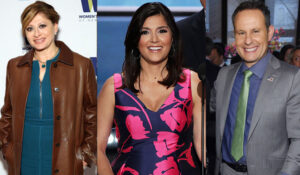 Rachel Campos-Duffy is intriguing. With a likable personality, she’s a fan favorite each morning she fills in on Fox & Friends. Depending on her performance in a solo format, Campos-Duffy could provide an uptick in interest at the 7 p.m. hour.

Steyn and Gowdy are routine fill-in hosts for Carlson and Hannity, respectively. Fox knows what it has with Gowdy and Steyn. Both are solid hosts with limited ceilings.

Katie Pavlich’s involvement is not surprising, though the format for a nightly solo show differs from most of her previous roles. Fox News is high on Pavlich, and she performed well on the network’s 2020 election coverage. An impressive week could open up doors for Pavlich, even if she’s not named the permanent host at 7 pm. I expect Pavlich’s status at Fox to grow, regardless.

And then there is Maria Bartiromo. She has become a lighting rod for the network, appearing in headlines as often as any non-primetime host. As a rule, all buzz is positive. The worst thing a host can be is ignored. That said, some of Bartiromo’s recent coverage of alleged voter fraud could be seen as a headache.

Should Bartiromo make a case as the permanent host, Fox Business would then have to find a replacement for its morning show. From December 30, 2019, to December 25, 2020 — Mornings with Maria averaged 128,000 viewers. For a three-hour morning show on a business channel, that’s a significant number. Bartiromo is a draw.

As someone who has covered numerous media openings, I know that decisions don’t always go as planned. There are twists and turns, sometimes even leading to unexpected selections. The best choice isn’t always picked either, as other factors are involved, including salaries, contracts, preconceived notions, personal relationships, and audience reaction.

All in all, Brian Kilmeade’s case is strong and has currently has distance.