Isimemen Etute, the former Virginia Tech linebacker who was charged with second-degree murder in the death of a Tinder match who had lied about his gender, was acquitted on Friday.

Etute, 19, had matched with Jerry Smith, 40, on Tinder just over a year ago, and the two decided to meet up so that Smith could perform oral sex on Etute. However, Smith called himself “Angie” and presented himself as a woman. Smith allegedly insisted that the two meet in the dark for their tryst.

A month later, Etute returned to Smith’s apartment because he suspected that Smith was not the female he claimed to be. After Etute touched Smith in the groin area and verified the presence of a penis, Etute then repeatedly punched Smith.

A detective in the case testified that Etute beat Smith to death.

However, the defense claimed that Etute used his fists in self-defense. Etute took the stand in his own defense and claimed that while he was at Smith’s apartment the second time, he believed that Smith was reaching for a gun. Etute said he punched Smith five times and kicked him so that he could escape. He also testified that he felt “violated” when he discovered that Smith was not a woman. 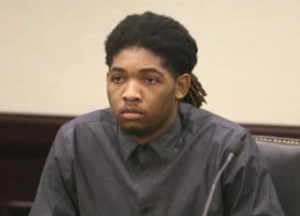 Prosecutors then countered that Smith, who weighed just over 150lbs, was no match for “an elite college athlete” of Etute’s size and physical condition. Etute is 6’3, 205 lbs. Prosecutors also noted that Smith did not have a gun. Though they admitted that Smith had a knife under his mattress, they claimed he was in no position to access it when Etute began assaulting Smith.

The jury must have disagreed because they took just three hours to acquit Etute.

Etute was dismissed from the Virginia Tech football team last June when he was charged with murder.