Zac Stacy, a former NFL running back who spent time with the Rams and Jets, will likely soon be spending some of his post-playing days behind bars. Stacy, 30, brutally attacked the mother of his five-month-old son over the weekend, going as far as to throw the woman into a nearby TV. The graphic incident was captured on video by an in-home camera at her residence.

WARNING: The video below is disturbing.

The video shows Stacy and the mother of his child arguing. She tells Stacy, “Things are way different now.” Almost instantly, Stacy throws two vicious punches at the woman and she pleads with him to “stop, stop!” Undeterred, the former running back, who was listed at more than 220 pounds, then throws the woman into a nearby TV, sending both her and the TV to the floor.

Throughout the assault, the former couple’s five-month-old baby sits quietly nearby, and is even hit from his mother’s fall.

While covered up on the floor, the female again begs Stacy to relent, shouting “please, please!” At that point, the baby can be heard crying, but that doesn’t stop Stacy. He again swings at his ex, hitting her in the head before again aggressively grabbing her and tossing her for a second time before the video cuts off. According to a restraining order filed by the woman on Monday, after brutally beating the mother of his child, Stacy said “I love you” to their son, then walked out the door.

The woman was treated at a nearby hospital for head injuries and general bumps and bruises.

Stacy, who’s been out of the NFL since being waived in 2016, had been serving as a youth ambassador with the Music City Bowl. When reached by email via OutKick’s Trey Wallace this morning, the TransCity Music City Bowl announced they were terminating their relationship with Stacy. 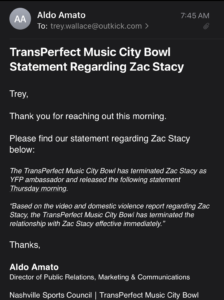 “Based on the video and domestic violence report regarding Zac Stacy, the TransPefect Music City Bowl has terminated the relationship with Zac Stacy effective immediately.”