Florida woman Julia Yonkowski was just trying to grab $20 from a Chase Bank ATM Saturday when one thing led to another and she learned there was a billion dollars in her account. $999,985,855.94 to be exact. Julia told WFLA that instead of withdrawing a couple straps and blowing it at the clubs, she freaked out. Her Florida crazy radar went off and she thought her account had been compromised and some hackers had infiltrated her money supply.

“Oh my God, I was horrified. I know most people would think they won the lottery but I was horrified,” she told a WFLA reporter. “When I put in for the $20, the machine came back and said we’ll give you the $20 but that’ll cause an overdraft and you will be charged and I said, ‘Oh just forget it,’” she added.

So Julia went home and did what a responsible adult does: she tried to call Chase Bank to say there must be an error. Guess how Chase handled this news. They didn’t answer. Julia couldn’t get a human on the phone to de-billionaire her account. Julia didn’t want to be a billionaire on paper and yet here was Chase not answering her calls.

Julia’s next idea was to turn to WFLA’s i-Team to get results. The station’s ‘8 On Your Side’ team assembled and guess what happened. Chase Bank didn’t answer the i-Team’s calls!

You can’t make this stuff up. Chase Bank took the weekend off while this poor lady was losing sleep because she was now a billionaire. 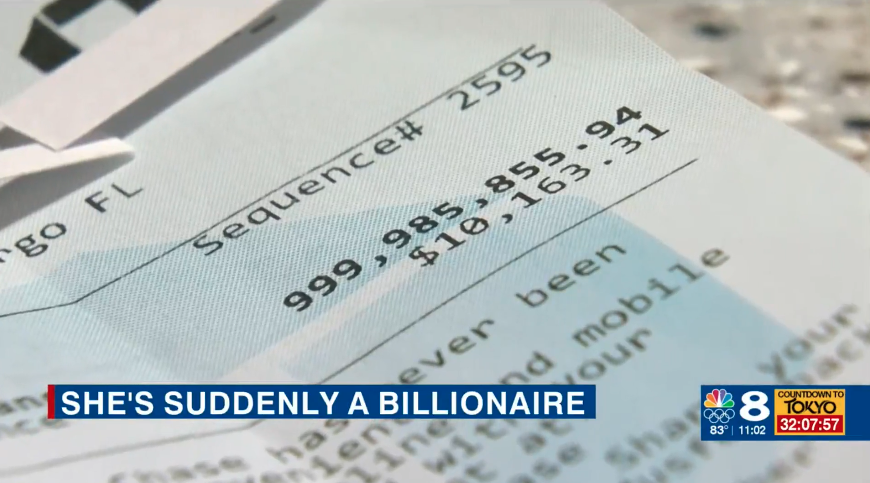 • I’m having a hard time following the part where she tried to withdraw $20 and there was going to be an overdraft charge. Julia had to have more than $20 sitting in her account. Something is off about that part.

• I know you guys were wondering that part as was I.

• If Chase went two nights without realizing they transferred a billion into her account, I wonder how long it would’ve been until they realized it was in there? Would it have been possible for Julia to walk into a Chase, tell them she needed a million (large bills, please!) and then jump on a private jet out of the country without Chase figuring out what was going on?

• I feel like it’s about time for a movie to be made over one of these glitches. Some sort of suspense thriller where a down-on-her-luck Instagram model suddenly has $10 billion in her account and she ends up in Tulum living a secret life. Matthew McConaughey is the FBI agent in charge of tracking her down via a secret covert Instagram DM program that leads him on a wild goose chase around the western Caribbean. This has potential.

• Chase should at least give Julia a couple of $20 prepaid debits for pain and suffering, right?

• Here you go if you want to read about someone who didn’t call the bank and blew through a bunch of money after a bank glitch.