Daytona Beach, Florida cops are on the hunt for the person responsible for blasting through a gate and catching air during a Monday morning incident. They aren’t saying the exact charges the driver — possibly on a cellphone — will face, but they have to range from destruction of property to disorderly awesomeness.

Yes, you have to drop the hammer on the driver for destroying public property, but it’s also nice to see someone in Florida producing awesome content. As someone in the comments says, let’s all dream for a minute that “Panama” is cranking in that car. Or the Grand Theft Auto ‘Vice City’ main theme.

“All units, this is dispatch…we got a station wagon blasting ‘Panama’ and being awesome, partying’ and being rad…”

Possible reasons for smashing through a drawbridge gate on a Monday morning:

• Blinded by the sunrise

• Side piece called and said come over 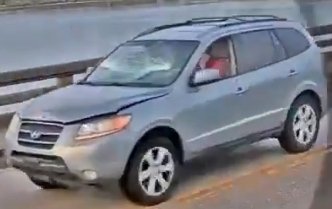 • Text exchange dared him/her to do it

• Late for a tee time at the muni course

Must have been an important call. pic.twitter.com/hrlHhOZlPG