There are a handful of exceptional individuals who can get away with talking in the third person. Floyd Mayweather, Stone Cold Steve Austin, and Jennifer Lopez all can. It may not be likable, even with them, but at least it’s reasonable. Then there’s Dr. Fauci.

In a self-serving interview with the New York Times, the babbling tyrant went third person to utter his best nonsense since becoming a regular on CNN, MSNBC, ABC, NBC, and CBS.

“The more extreme they get, the more obvious how political it is. ‘Fauci has blood on his hands,'” Fauci says, talking about himself.

“Are you kidding me? Here’s a guy whose entire life has been devoted to saving lives, and now you’re telling me he’s like Hitler? You know, come on, folks.”

Got that? Dr. Fauci is not Hitler. He’s a better man. He tells us so himself.

That’s the type of insight you can’t get from your local family doctor. It is the reason we’ve kept Fauci around since Ronald Reagan.

Has anyone of note compared the TV analyst to Hitler? If not, what an advantageous angle to fabricate ahead of this week’s series of TV hits.

Chris Cuomo, probably: The Right is calling you Hitler. Tell us why they are wrong, Dr. Fauci.

“Here’s a guy whose entire life has been devoted to saving lives,” Dr. Fauci on Dr. Fauci.

Chuck Todd, probably: Dr. Fauci, you have spent your entire life saving others’ lives. How have you done it?

This guy, Fauci, is a TV genius and truly a world-class quote machine. Oh, and he is not Adolf Hitler. Remember that. 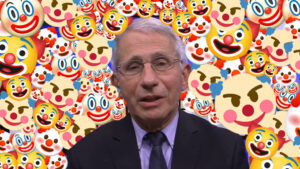