Life is not all bad. Good news is here and we have it.

Edie Falco, known to the world as Carmela Soprano, has been cast as Hillary Clinton in the upcoming Impeachment: American Crime Story TV series.

The limited series will focus on the infamous Bill Clinton-Monica Lewinsky sex scandal, ever heard of it? Clive Owen is set to play Bill Clinton with Beanie Feldstein as Lewinsky. Another notable cast member is Billy Eichner as Matt Drudge, who is a crucial figure for this series.

Impeachment is the third season of the acclaimed FX anthology series, the first two seasons focused on O.J. Simpson’s murder trial and the killing of designer Gianni Versace, respectively. The third season is based on Jeffrey Toobin’s book, A Vast Conspiracy: The Real Story of the Sex Scandal That Nearly Brought Down a President.

If you haven’t finished The Sopranos, you are awful and here’s a hint: Edie Falco is fantastic. Carmela is an all-time great TV character. In fact, I would’ve given Carmela a much better shot to win the 2016 election than Hillary. 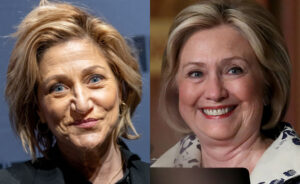 Impeachment: American Crime Story is expected later this year. While many websites will cover it, I can promise you no one will have the Hillary Clinton-Carmela Soprano and, yes, Tony Soprano-Bill Clinton comparisons like I will.