“Congratulations on a tremendous campaign. You have dealt with an unbelievable slanted and negative media, and have come out beautifully – beautifully. You’ve proved to be the ultimate competitor and fighter. Your leadership is amazing. I have always had tremendous respect for you, but the toughness and perseverance you have displayed over the past year is remarkable. Hopefully tomorrow’s election results will give the opportunity to make America great again. Best wishes for great results tomorrow. Bill”

“I’ve received a number of inquiries relative to a note I wrote to Donald on Monday,” Belichick said of the letter when asked by reporters. “Our friendship goes back many years. I think anybody that spends more than five minutes with me knows I’m not a political person. My comments are not politically motivated.”

The Patriots did not respond to Politico’s request for comment on the matter, so we will have to see whether Belichick receives the award in person later this week. 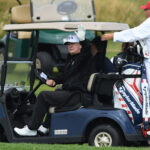