You are probably wondering why Domonique Foxworth, known for forcing only three fumbles in more than six seasons in the NFL, is the focus of a Josh Allen story. Since retirement, Foxworth has worked as a far-Left analyst for ESPN. It turns out, he’s a rather hateful one, too.

With no shame, Foxworth admitted to former TV host Bomani Jones that he actively roots for Josh Allen to fail. He wants him to be unsuccessful, and the reason why is even more telling. According to Foxworth, he wishes Allen’s career harm because his fans support dogs and the American flag.

That’s right, America and dogs are a no-go at ESPN.

These comments are wild. Imagine the fall out if a white ESPN analyst said he rooted against Lamar Jackson because of his followers. He’d be unemployed within five minutes.

Aside from how radical Foxworth’s comments are, they are also a bit funny. Foxworth is aggressively rooting for a subject he covers to fail, a player who is on the verge of stardom.

This isn’t the same as rooting against Colin Kaepernick when he lost his job to Blaine Gabbert. Kaepernick was struggling on the field. Allen is actually a great player, one of the best players in his sport. After Patrick Mahomes, Josh Allen is the most coveted franchise QB in the NFL.

Allen also has the best arm in the league. As former NFL QB Jim Miller said this week, “Physically, Josh Allen can do things that no other QB in the NFL can do.”

“No. Mahomes can’t do what Josh Allen can do,” Milles goes on “Josh Allen has the bigger arm than Mahomes, Josh is the better athlete than Mahomes. He may not be as savvy as Mahomes right now; Mahomes is a savvy player and he’s gifted athletically too. But I’m telling you, Allen is more physically gifted.”

And the best part is that Allen is only 60% of what he can be. If all goes right, he will become a bigger, stronger, and more athletic version of a Madden-created QB. (Does Foxworth like Madden? Some of the users like dogs, I hear.)

As Colin Cowherd said, behind Allen, the Bills are the NFL’s best team. Imagine the reaction if Allen leads his team to the Super Bowl. Would ESPN just cover the NBA regular-season games during Super Bowl week? Actually, it does that anyway.

If Foxworth is going to root for failure, he shouldn’t aim at one of the future faces of the NFL. Instead, he should focus on sure-bet failures. Some ideas: Adam Gase, Anthony Lynn, the NBA’s ratings, “jokes” from Jemele Hill and Cari Champion, and Highly Questionable‘s new rotation. 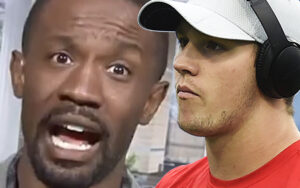