I’m not sure whether or to what extent this is common knowledge, but Dominos has summarily cleaned Pizza Hut’s clock. What hit home about this to me were a couple things: 1) While I don’t have a major preference between the two brands, my wife strongly prefers Pizza Hut, which shut down its location a few blocks from us in Chicago, leaving us out of the chain’s delivery range. 2) We also saw the news in July that a major Pizza Hut franchisee declared bankruptcy; this week it’s been announced that 300 of their locations will be closing.

Since the Great Recession, Dominos has capitalized on tech and marketing to close a considerable revenue gap between the two pizza chains, ultimately surpassing Pizza Hut in what has been a decades-long race.

Unless you’re a passionate investor, you probably don’t realize what a rocket ship Dominos stock has been. At the height of the Great Recession, in November 2008, Dominos stock had plunged to $3.86 a share. It’s over $400 today: 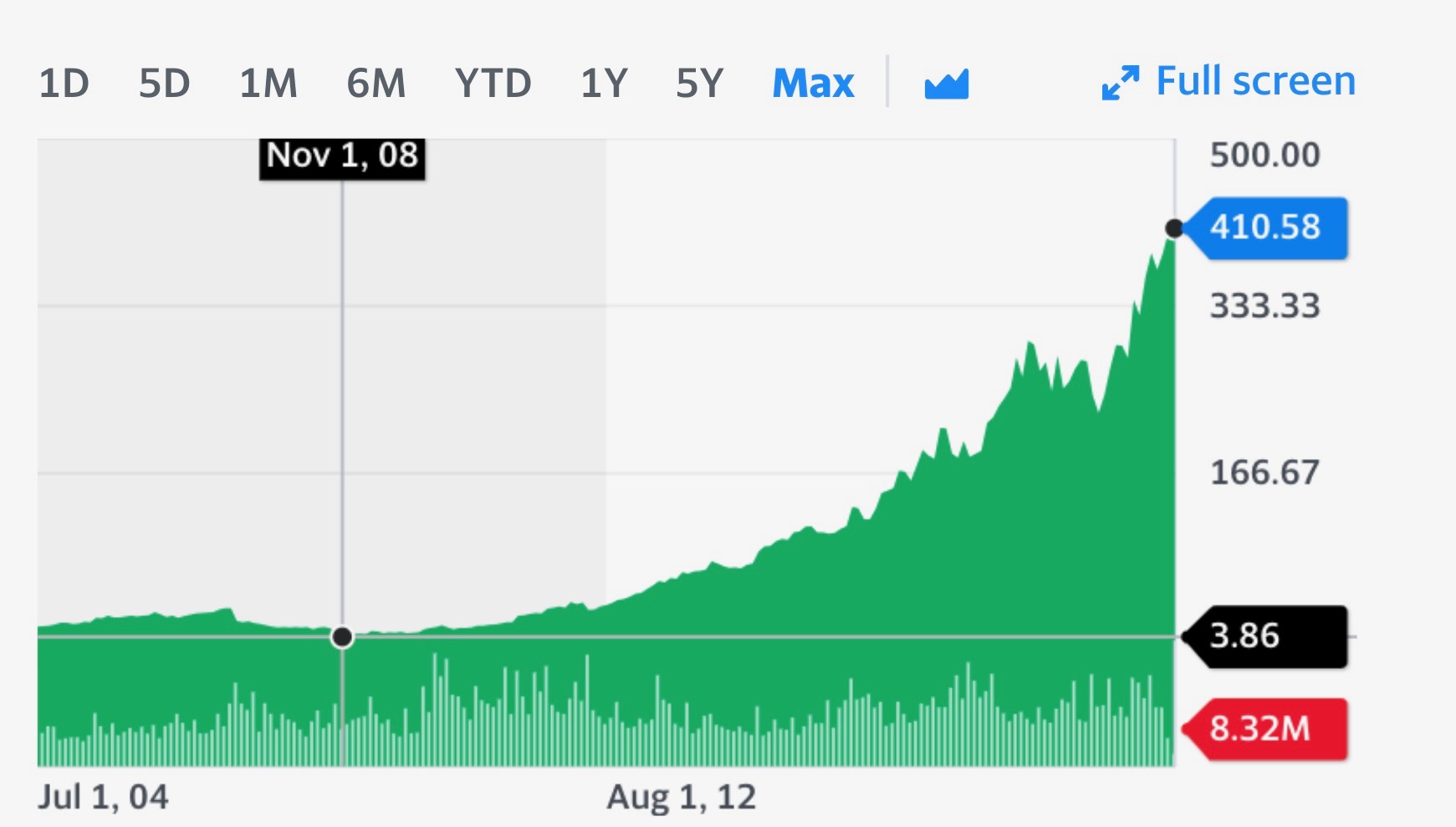 Yum! Brands — the company which owns Pizza Hut, KFC, and Taco Bell — hasn’t been a lemon stock or anything, but it’s merely quintupled while Dominos has gone up more than 100-fold. Here’s the YUM chart: 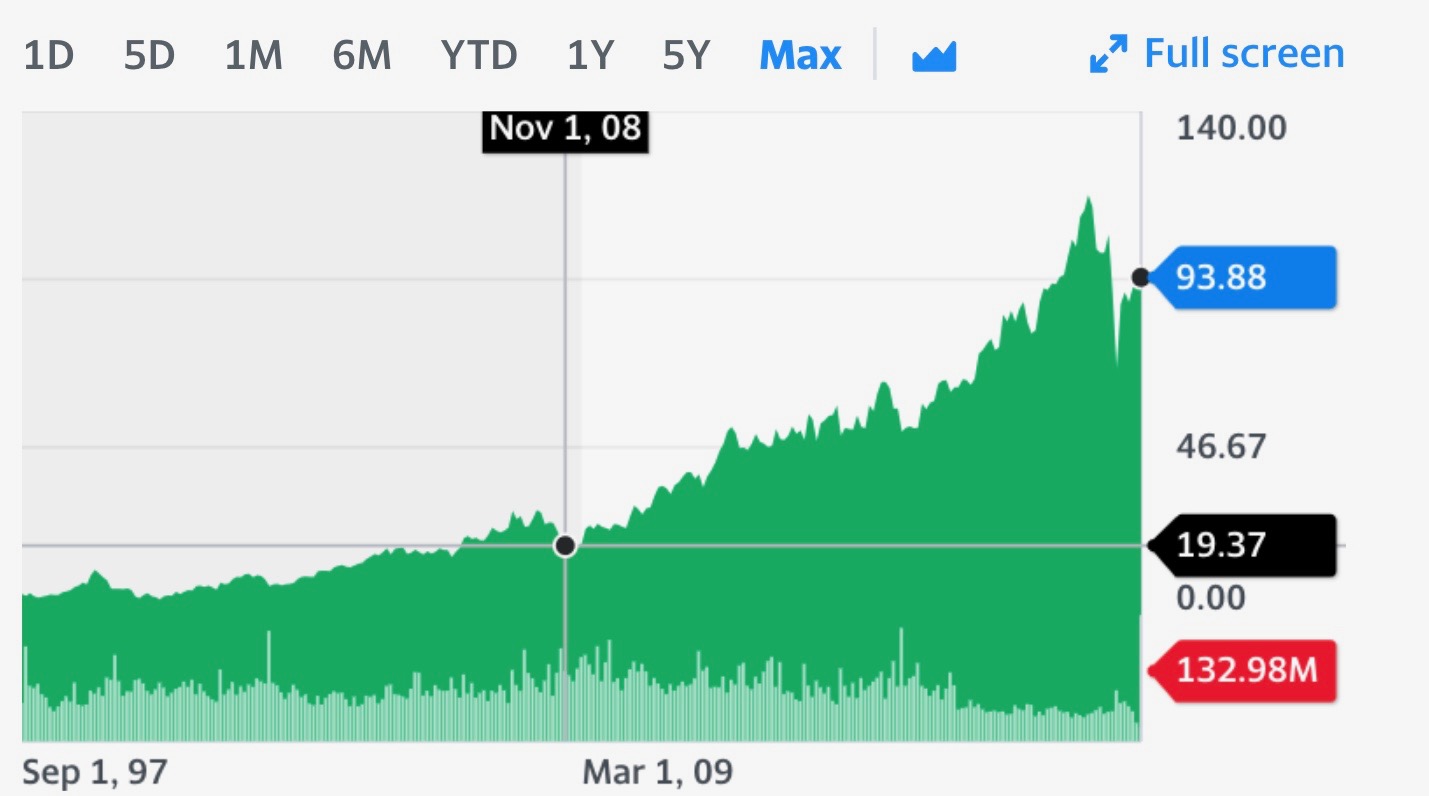 According to this solid story about the history of Dominos and Pizza Hut competition and how the latter has been lagging in innovations, Dominos went from $8 billion revenue in 2013 to $13.5 billion in 2018; Pizza Hut was flat across the time period at about $12 billion in revenue.

The weird thing about this, and no disrespect to my wife’s preferences, is that Dominos and Pizza Hut don’t have appreciably different food quality in my opinion. I slightly prefer the actual pizza at Pizza Hut, but enjoy the sandwiches, pastas, and other sides and desserts more at Dominos.

Where Dominos has reigned supreme has been in marketing and especially technology. In 2009, Dominos began a revelatory ad campaign where they literally admitted that their pizza used to be terrible and begged customers to give their new recipe a chance:

If you could’ve predicted that would’ve worked, well, as we’ve discussed, you’d have made an insane amount of money. When I saw those ads my feeling was that they had been marketing their pizza the whole time in which now they were admitting it was bad, so why should we believe them now?

Ultimately, the marketing campaign went hand in hand not necessarily with discernibly better pizza, but definitely a noticeable uptick in technology. Now, with the advent of Uber Eats and other delivery apps we take online ordering and status updates for granted. If you can think back a decade, however, it wasn’t like that at all. You’d order by phone, maybe get a busy signal or put on hold, and then it would be anywhere from 30 to 120 minutes until you received your food. There was no way to really check when you’d get it except by calling the restaurant again, hearing someone annoyed with you on the other line, and generally receiving a still-vague answer.

Dominos may not have been the first place to introduce online ordering, but they definitely provided a great user experience on both desktop and mobile. Not only was it easy to order, they had status updates about when the food was entering and leaving the oven and when it was out for delivery. This clearly made a gigantic difference to millions of customers as their business has exploded. Pizza Hut has eventually caught up, but their lateness really cost them.

Obviously, Dominos and Pizza Hut aren’t the only players in this industry. Little Caesars and Papa Johns compete with them on a national level, and then there’s places like Blaze that are trying to be a step up in quality. Nonetheless, because Dominos and Pizza Hut are the two most recognizable pizza chain brands in not just America but the world, this is an interesting case study in divergence.