You’re sitting there on the rail at Dodgers Stadium, enjoying a heaping bowl of stadium nachos after a year of living in the California Republic of Newsom. It’s another lovely Los Angeles night. Not a hint of smog in the sky. Green grass. The Dodgers organist plays sweet sounds between innings. The nacho cheese has never tasted better. It’s better than you remembered it back in 2019, the last time Dodgers fans were allowed into a baseball game.

Justin Turner walks up to the plate. He’s been strokin’ the ball (.390, .732 slg %) early in the year. The processed stadium nacho cheese is going down smooth. You calculate in your head how much cheese to apply to each chip as Colorado’s Jon Gray delivers the 2-1 pitch.

It’s a meatball right down the middle. Turner’s a 13-year vet. He absolutely unloads with the launch angle and sends it into the Los Angeles night and right at you. This is why you sit on the rail, to be a home run Hoover vac.

Suddenly your Little League coach is in your ear: Play the ball, don’t let it play you. Give up your body. Knock the ball down, make a play.

And then it happens. The Turner home run blast scud missiles right into your $15 dollar nachos, launching that beautiful stadium cheese all over your prized hoodie jacket. But the reward in all this is that you go home with a souvenir in the form of Turner’s 127th career home run ball.

Congratulations on your big night at Dodgers Stadium, sir. 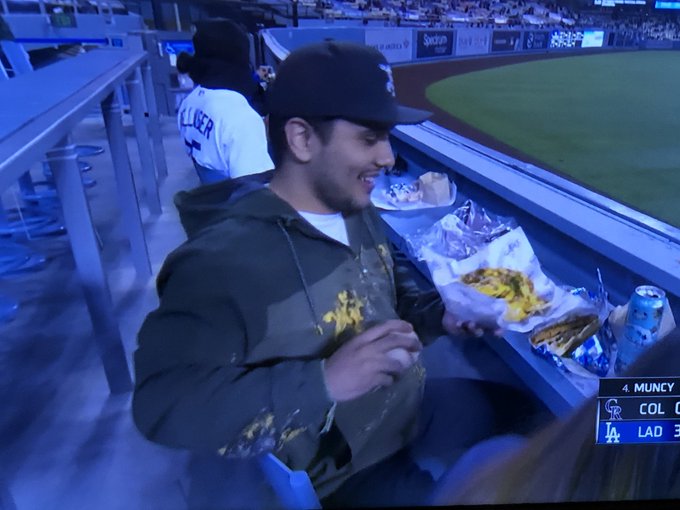